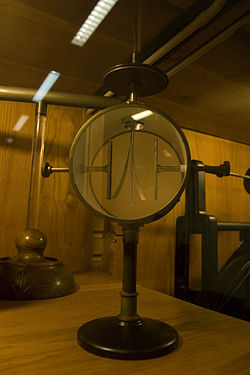 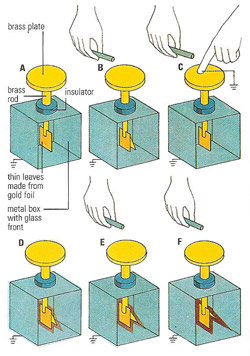 Fig 2. How a gold-leaf electroscope works.

A gold-leaf electroscope is an instrument used (mainly historically) for the measurement of electric charge or potential, based on one or two fine gold foils suspended vertically and free to deflect under electrostatic repulsion when an electric charge was applied (Fig 1). Although never very accurate, the instruments could sometimes detect as little as 10-14 coulomb and were used to measure radiation intensity through the rate of charge leakage caused by ionization of the air.


How the gold-leaf electroscope works

A) The uncharged electroscope with leaves collapsed.

C) With the charged rod still in place, the plate is earthed, and electrons flow from the leaves through the hand to earth. The leaves collapse.

D) The electroscope is positively charged when the finger, and then the rod, is removed – thus some positive charges at the plate spread the leaves and they repel each other and diverge.

E and F) The leaves diverge even further when the rod is brought nearer to the plate indicating that the influence of the charges is greater at close range.