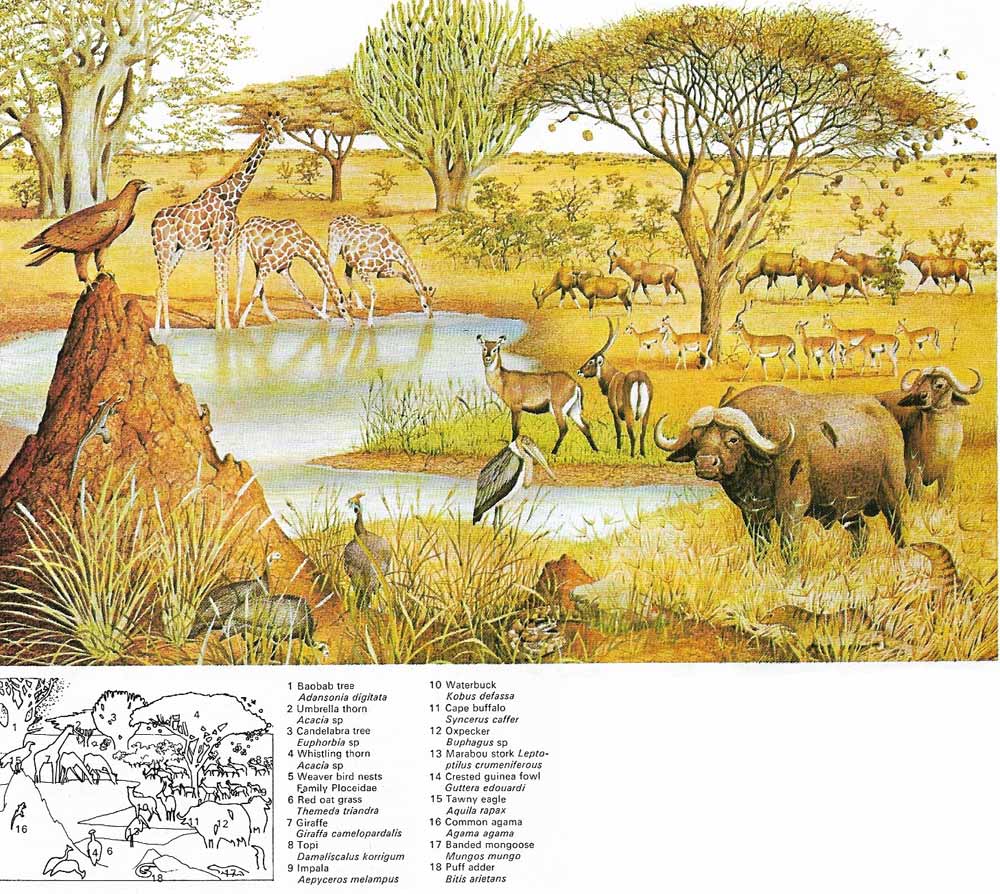 The African savanna, with its flat-topped acacias, supports large herds of herbivorous mammals. Their predators, being mainly nocturnal, are less often seen. But birds, from the busy weaver to the scavenging marabou stork and vegetarian guinea fowl, are as conspicuous as the game. 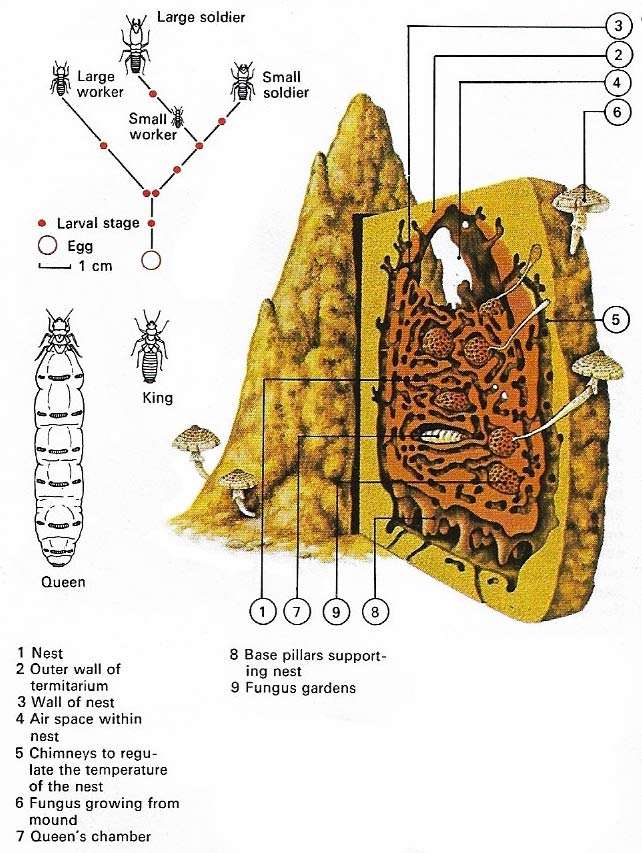 Fig 1. A termite mound, with its blank exterior, gives no hint of the complex system of chambers and tunnels within. Thick, hard walls deter most predators and chimneys can be opened or closed to regulate the temperature. The mound is developed from a hole occupied by a mated male and female. The female (queen) only produces eggs, which become either workers or soldiers. Termites feed on wood and leaves brought in by foraging workers, and on fungus grown on faeces in special fungus gardens. 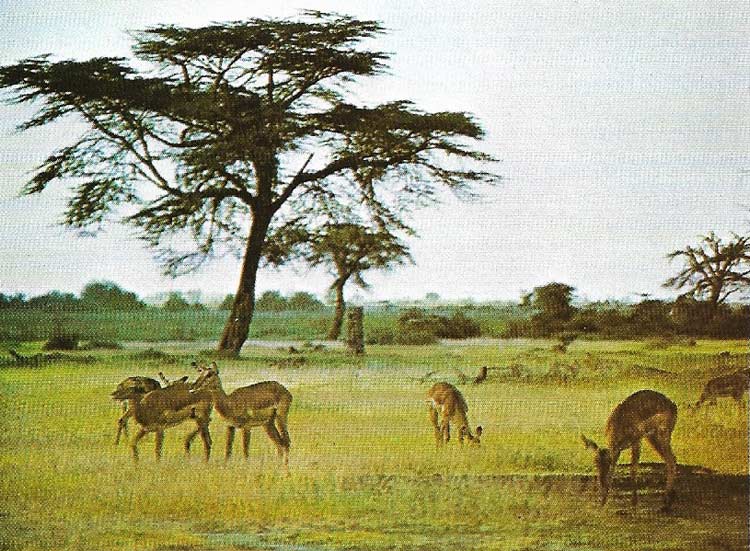 Fig 2. A typical savanna scene might have a herd of Grant's gazelle ( granti) feeding on grass. The open plains are dotted with wide-topped acacias and clumps of small bushes. 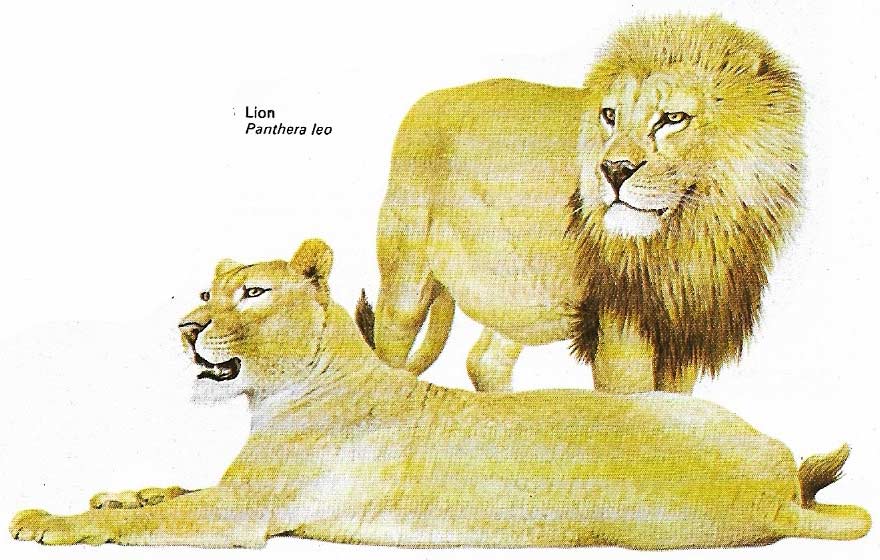 Fig 3. Prides of lions, often with several adult males, are commonly seen lazing in the shade of a tree. Lionesses, which lack manes, do most of the killing, often working as a team to stalk prey. Lions themselves have no natural enemies except man. 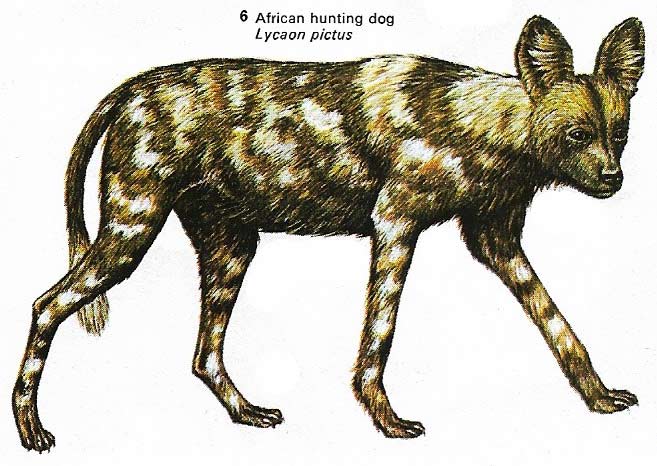 Fig 4. African hunting dogs are gregarious animals that live in packs of from 6 to 20 individuals. They hunt in an organized manner, taking it in turns to chase their animal prey until it is exhausted. 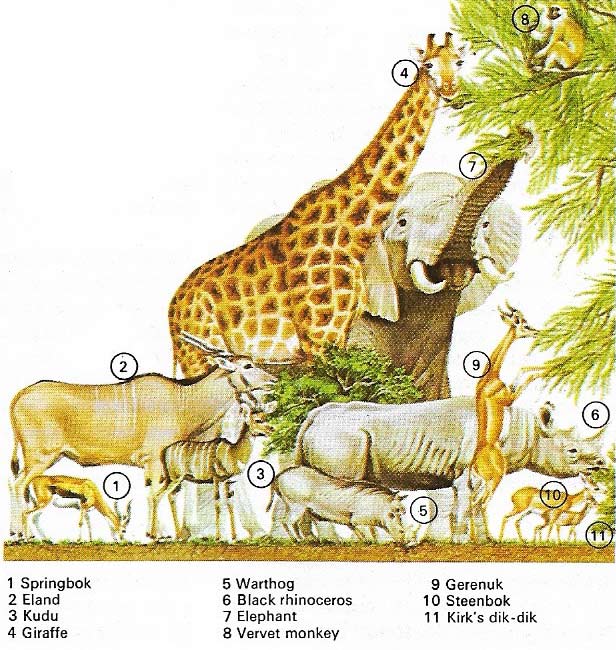 Fig 5. Vertical feeding patterns of savanna herbivores reduces competition between species. The giraffe (4) takes leaves 6 m (18 ft) up, leaving the lowest ones for the tiny dik-dik (11).

Savanna grassland covers much of Africa from the Sahara to the Cape. Only in the west does it give way to the dense tropical forest of the Zaire River basin and the West African coast and to the Namib Desert. The grassland is not a uniform area, but ranges from dry steppe and sub-desert in the north and southwest (on the fringes of the Sahara and Kalahari deserts) through thorn scrub to open savanna woodland in the equatorial region. The landscape is bisected by watercourses and granite hills, and much of the southern area is modified by farming.

The transitions between the various types of savanna are distinct and each type has its own characteristic fauna and flora. The open woodlands are characterized by fire-resistant trees such as Brachystegia and Isoberlinia which are replaced in drier areas by acacias (thorn-scrub) and baobabs. The vegetation of the open areas is a mixture of grasses and herbs with occasional acacias. Ecologically, the savanna is a highly complex system of interdependent components. The food of the large herds of grazing animals- the grasses and herbs – is resistant to drought, fire and grazing and quickly recovers from their effects. Many savanna grasses reproduce by underground runners and can spread rapidly. The trees and bushes are protected from excessive browsing by long thorns on the trunks and branches.

The bewildering number of savanna animals exploit their environment in a variety of different ways. Among the browsers there is a vertical zoning of feeding habits (Fig 5). Giraffes and elephants feed on the trees – giraffes on the topmost shoots and elephants both on the upper shoots and and the bark. Black rhinoceros, eland, kudo, and gerenuk browse on lower shrubs and trees, with the lowest branches often only centimeters above the ground, providing food for steenbok and dik-dik. The grazing animals utilise the grasses in different ways. Zebras feed on the course tops, the leafy center is eaten by wildebeest and topi and gazelles crop the shoots at ground level. Underground roots and bulbs are eaten by warthogs.

Feeding on the herds of grazing animals are a number of large predators. One of the best known is the lion (Fig 3), which lives in family groups and catches its prey in a short rush from cover. Two other cats are also to be found on the savanna: the leopard, which often kills from cover at waterholes, and the cheetah, which is capable of out-running gazelles over a short distance. Small packs of hunting dogs (Fig 4) roam the savanna, working as teams and pursuing their prey until it is exhausted and falls victim to their snapping jaws. The hyenas are both predators and scavengers. No young animal is safe from them and no bone is too large for their powerful jaws to crack.

As well as the large and spectacular animals, many small animals, not often seen, live in the savanna. Like the larger animals they occupy a particular niche. The numerous rodents and hares feed on seeds and herbs and in turn provide food for foxes, snakes, small cats and birds of prey. Many kinds of mongooses, civets and weasels Prey on the large numbers of small savanna animals. Two animals of especial interest are the meerkat and the ratel. The meerkat is a sociable burrowing animal living in large warrens and feeding on insects, spiders and millipedes. Also living in burrows, the ratel or honey badger is best known for its association with the honey guide – a small brown bird. When this bird finds a bees' nest it attracts the ratel with a particular call and leads it to the nest. The ratel digs out the nest with its powerful claws and both animals share the feast.

Great numbers of birds inhabit the savanna, many more than live in the tropical rain forest. Ostriches, the world's largest birds, often accompany the grazing herds; so do storks and egrets, which feed on disturbed insects. The majestic kori bustard and the snake-eating secretary bird can also be seen striding through the grass. The nests of weaver birds, like huge fruit, adorn many acacias and overhead the circling vultures and soaring eagles scan the ground for carrion and small animals.

In summer vast numbers of birds migrate from Europe and Asia to the savanna regions to escape the severe northern winter. This enormous variety of birds feed on seeds, berries and insects and is in turn preyed upon by hawks, owls and falcons.

Because of the seasonal rains, migration is a major feature of life on the savanna. Because the grass stops growing during the dry season the wildebeest and other animals, such as the zebra, move to areas where rain has fallen and the grass is growing. During the migration many thousands of animals, particularly wildebeest, die through drowning and starvation. Scavengers and predators, notably vultures and hyena, take full advantage of the superabundance of easily obtained food. However, such is the richness of their environment that the numbers of wildebeest soon recover from this apparent catastrophe.

The delicate balance of the savanna ecosystem is easily upset, especially by man. Fortunately, enlighten governments aware of the unique nature of the wildlife heritage have set aside large areas of the savanna as inviolable sanctuaries.