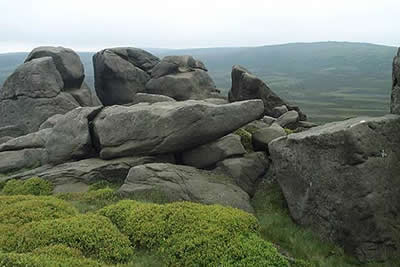 An outcrop of gritstone rock in Derbyshire, England.

Gritstone is a medium- to coarse-grained sedimentary rock with angular grains that may rub off easily. Most gritstones are formed in water. The chief mineral components are quartz, feldspar, and mica. Those with more than 75% quartz are called quartz gritstone, whereas more than 25% feldspar gives rise to feldspathic gritstone; the former has an orange color and the latter is brown, sometimes tinged with pink.