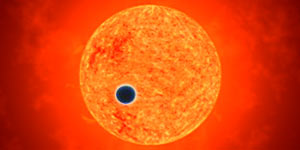 Artist's impression of HD209458b in transit. 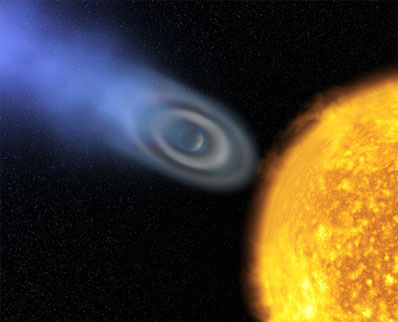 HD 209458 is a Sun-like star with an exoplanet, HD209458b, that was found in 1999. Calculations by the planet's discoverers, Geoffrey Marcy and his colleagues of the San Francisco State University Planet Search, indicated that its orbital plane was positioned edge-on with respect to the Earth so that it might be possible to detect transits. This was confirmed by Greg Henry of Tennessee State University, using an automatic telescope in southern Arizona, who on November, confirmed a 1.7% drop in the star's brightness as the planet made its passage across the stellar disk. The amount of dimming of the star's light gave the first-ever accurate measure of the size and density of an extrasolar world.

HD209458b is a so-called "hot Jupiter," or epistellar Jovian, orbiting its host star once every 3.5 days at a distance of only 7 million km. The fact that it passes in front of the star, from our vantage point, for three hours every orbit, offers scientists the opportunity to study the planet and its environs in a unique way. Specifically, they can look for dark lines in the spectrum of the star's ultraviolet light caused by passage of the starlight through the planet's atmosphere. In March 2003, astronomers announced that measurements carried out with a spectrograph attached to the Hubble Telescope had shown that the planet is surrounded by a vast cloud of hydrogen, over 200,000 km across, that is billowing into space. Evidently, the intense heat of the nearby star is causing HD209458b to vaporize at the rate of least 10,000 metric tons per sec. Not only is the planet's upper atmosphere being subjected to intense heating, the star's strong pull of gravity is likely creating tidal forces that also distort its outer gas layers. The atmosphere is thus stretched, then hydrogen is pushed away by the starlight and strewn out in a large tail similar to those of comets. This evaporation of planets that are close in to their parent stars could explain the very few detections of planets orbiting at less than seven million km out. These planets either quickly evaporate, or become hydrogen-poor Neptune-like worlds.1