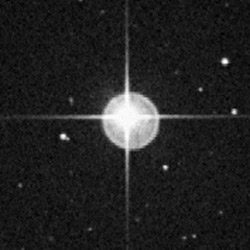 HD 210277 is a star slightly larger than the Sun, in the constellation of Aquarius, around which has been discovered a planet similar in mass to Jupiter. This was the first exoplanet to be found whose average distance from its host star is nearly the same as that of the Earth from the Sun. However, its orbit is so elongated that its separation from HD 210277 varies between less than the Venus-Sun distance and more than the Mars-Sun distance. As a result, the planet must be subject to extreme seasonal changes in temperature.