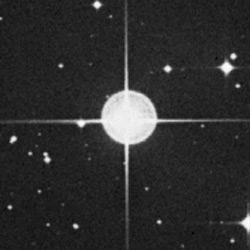 HD 75289 is a star, similar to the Sun but somewhat brighter, in the constellation of Vela. Around it has been found an epistellar Jovian, the sixth in order of discovery, with a mass only 1.4 times that of Saturn. HD 75289 appears to be similar in age to the Sun, although, as in the case of most other stars with known giant planets, its metal content is about twice the solar composition. See also exoplanets.