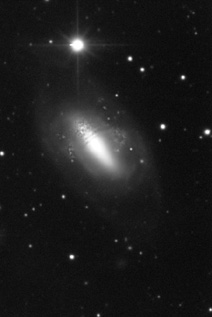 The Helix Galaxy (NGC 2685), also known as the Pancake Galaxy, is an unusual lenticular galaxy in the constellation Ursa Major that is a member of the very rare class of polar ring galaxy.

Several thin filamentary strands, consisting of knots of luminous star-forming regions and hydrogen gas, with a diameter comparable to the main disk, form a helical band perpendicular to the main disk and centered on the galactic nucleus. These structures suggest that NGC 2685 once had a companion, perhaps like one of the Milky Way's Magellanic Clouds, that was captured into a polar orbit and had its stars eventually merged with those of the larger system, leaving behind the companion's interstellar medium. New generations of stars formed from this material to produce the luminous ring seen today. It is possible that if the Magellanic Clouds had been closer to the Milky Way, they too would have created a polar ring around our galaxy. Perhaps a foreshadowing of this process can be found in the so-called Magellanic Stream, a string of hydrogen clouds trailing the Magellanic clouds and extending thousands of light-years along their orbit of the Milky Way.