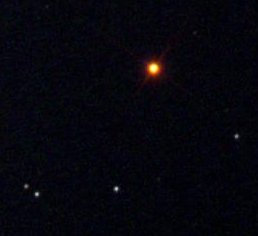 Hind's Crimson Star (R Leporis) is a long-period variable in the constellation Lepus, easily seen in binoculars when at maximum brightness. It was discovered by John Hind who described it as "... resembling a blood drop on the background of the sky."

R Leporis is the reddest reasonably bright star in the sky. Its wide variability comes about because the star produces enormous amounts of carbon which, when dredged up through convection, makes its way to the outer layers of the atmosphere. Carbon particles, or soot, concentrate to create an outer shell that dramatically dims the star. This dimming gives R Lep its extremely red appearance. At some point much of the carbon is blown away from the star and the process begins again.