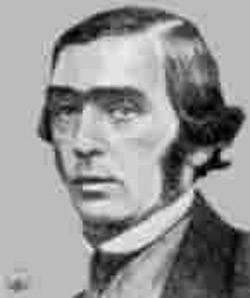 John Hind was an English astronomer who discovered ten asteroids and several notable variable stars, including Nova Ophiuchi 1848, U Geminorum, R Leporis (also known as Hind's Crimson Star), and a mysterious newcomer in the constellation of Taurus. While scanning the sky through the Pleiades and in the direction of the Hyades, he noticed a tenth magnitude star that was missing from the charts he was using. This is the object that became the prototype T Tauri star.

John Russell Hind was born in Nottingham and became interested in astronomy at an early age. In 1840 he obtained, through the influence of Charles Wheatstone, a position with the Royal Observatory in Greenwich, where he remained until June 1844. Hind was then sent as one of the commission appointed to determine the exact longitude of Valentia Island, off the southwest coast of Ireland, and on his return became the observer in George Bishop's private observatory in Regents Park, London. Here he calculated the orbits and declination of more than 70 planets and comets, and between 1847 and 1854 discovered ten asteroids. These asteroids are: 7 Iris, 8 Flora, 12 Victoria, 14 Irene, 18 Melpomene, 19 Fortuna, 22 Kalliope, 23 Thalia, 27 Euterpe, and 30 Urania.

In 1851 Hind obtained from the Academy of Sciences at Paris their Lalande medal, and was elected a corresponding member; in 1852 he obtained the Astronomical Society of London's gold medal, and a pension of £200 a year from the British government; in 1853 he became Superintendent of the Nautical Almanac.