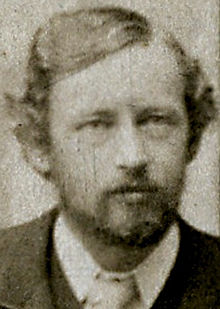 Charles Hinton was an English-born mathematician best known for his writings and inventions aimed at helping to visualize the fourth dimension; he may also have coined the name tesseract for the four-dimensional analogue of a cube. Hinton matriculated at Oxford and continued to study there, earning a BA (1877) and an MA (1886), while he also taught, first at Cheltenham Ladies' School and then, from 1880 to 1886, at Uppingham School. At this time, another teacher at Uppingham was Howard Candler, who was a friend of Edwin Abbott and thus provides a possible link between these two explorers of other dimensions. In the early 1880s Hinton published a series of pamphlets starting with "What is the Fourth Dimension?" and "A Plane World" (a contemporary of Abbott's Flatland), which were reprinted in the two-volume Scientific Romances (1884). Hinton's descriptions owed much to the mathematical models of William Clifford, whose theories about 4-d spaces were then in vogue. But Hinton went much further in his attempts to break free of three-dimensional thought. He devised an elaborate set of small colored cubes to represent the various cross sections of a tesseract and then memorized the cubes and their many possible orientations in order to gain a window on the fourth dimension.

At the time he was teaching in England, Hinton married Mary Everest Boole, the eldest daughter of George Boole, the founder of mathematical logic. Regrettably, he also married a Maud Wheldon and was tried at the Old Bailey in London for bigamy. After serving a day in prison for the offence, he fled with his (first) family to Japan, where he taught for some years, before taking up a post at Princeton University. There, in 1897, he designed a species of baseball gun which, with the help of gunpowder charges, would shoot out balls at speeds of 40 to 70 mph. It was used by the Princeton Nine for several seasons before being abandoned by the players in fear of their lives.

After a brief spell at the University of Minnesota, Hinton joined the Naval Observatory in Washington, DC. At the same time, he developed more rigorously his ideas on the fourth dimension and presented his results before the Washington Philosophical Society in 1902. What would prove, Hinton asked, the existence of a real fourth spatial dimension? He offered three possibilities, two of which, involving a specific molecular structure and a particular case of electrical induction, have since been explained by science in more mundane ways. However, Hinton's other case, to do with right and left handedness remains open because there are instances of right and left-handedness in nature, such as the spin of elementary particles, to which his example could be applied. In any event, Hinton's final assessment that we can only regard a four-dimensional space as possible if three-dimensional mechanics fails to explain known physical phenomena still rings true today.