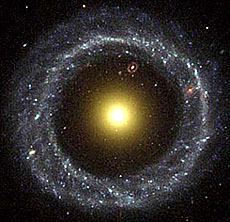 Hoag's Object (PGC 54559) is an unusual ring galaxy in the constellation Serpens, named after the American astronomer Arthur Hoag who discovered it in 1950. Observations have revealed an intricate structure in the bright ring, which has a near-circular projected shape and a diameter of about 100,000 light-years. According to one school of thought, Hoag's Object is a disk galaxy and the ring was formed from the end of a central bar that has since dissolved. Countering this is the view that the inner core is an E0 elliptical galaxy, not a disk, and that the ring resulted from an accretion event 2 to 3 billion years ago. It has also been proposed that Hoag's Object be considered the prototype of a class called Hoag-type galaxies, which are neither obviously barred nor obviously inclined disks, and which have outer rings including a significant fraction of the total luminosity.