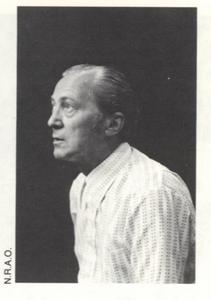 Sebastian von Hoerner was a German radio astronomer who worked at Green Bank with Frank Drake and later at the Astronomisches Rechen-Institut (Astronomical Calculation Institute) in Heidelberg. He was active in the 1960s in discussions about SETI, the number of advanced civilizations in the Galaxy, and the feasibility of interstellar travel. In a 1961 paper,1 he discussed various factors that might affect the longevity of technological races and what this in turn would mean for the chances of success of SETI programs. He was not generally optimistic about the long-term survival prospects of machine-using species, noting that science and technology on Earth were often driven by:

... the fight for supremacy and by the desire for an easy life... [These forces] tend to destroy if they are not controlled in time: the first one leads to total destruction and the second one leads to biological or mental degeneration.

The latter view he shared with Ronald Bracewell. He also considered the possibility that a species might lose interest in material progress or be completely wiped out. In von Hoerner's opinion, it was feasible that a succession of technological species might rise and fall in the lifetime of a planet, each new emergence taking hundreds of millions of years. His calculations showed that if the average longevity of an advanced race is 6,500 years and each habitable planet produces an average of four technological species, then perhaps one in every 3 million stars might support a race capable of interstellar communication. The mean distance between such worlds would be about 1,000 light-years. von Hoerner was among those, including John Pierce and Edward Purcell, who regarded interstellar travel as an unlikely proposition. Even assuming spacecraft could be accelerated to almost the speed of light, at which relativistic time dilation would come into play, von Hoerner argued that it would never be acceptable for travelers to cross a thousand light-years or more to reach another inhabited planet, only to return home and find that many centuries had passed by.2