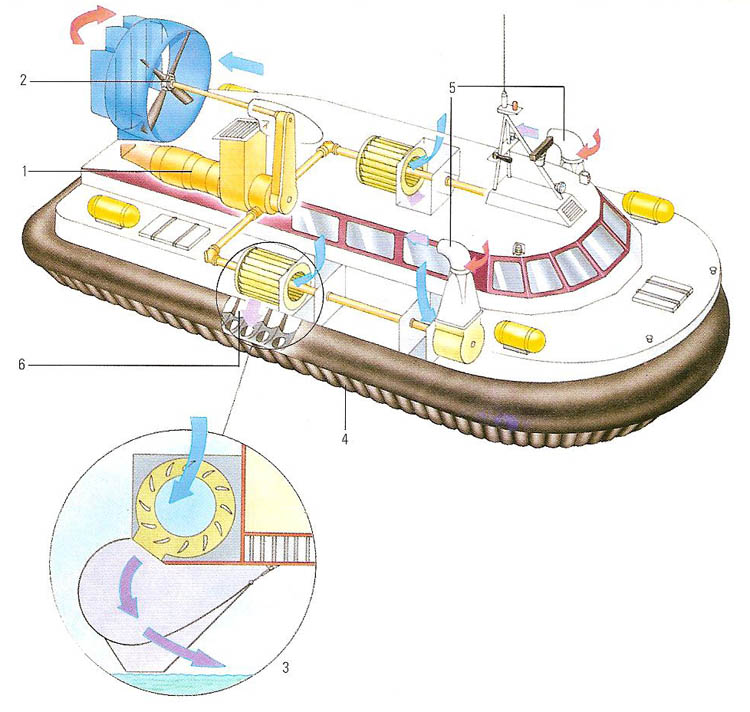 In this hovercraft, or air-cushion vehicle, a turbine (1) powers a propeller (2) for forward motion. Two main fans (3) pull in air and force it into the skirt (4) beneath the vehicle providing lift. Two smaller fans (5) blow air through directable nozzles on top of the craft providing maneuverability. The skirt, divided into cells (6) forms a seal around the air cushion and acts as a giant shock absorber.

A hovercraft, also known as an air-cushion vehicle (ACV), is a versatile marine, land, or amphibious vehicle which supports its weight on a high-pressure air cushion maintained by one or more horizontal fans. Because this minimizes the friction between the craft and the ground, vertical fans can maintain speeds up to 160 km/hr (100 mph), even over difficult surfaces. Hovercraft are invaluable for negotiating swamps, and are used as marine ferries and military vehicles. Smaller, less speedy craft have been developed as runabouts.

A hovertrain is a high-speed train that uses an air cushion to support it just above a special track. Ground-effect machines (GEMs) are sometimes distinguished from ACVS as, like airplanes, they derive most of their lift from their aerodynamic design and forward motion.

The air-cushion principle was rediscovered by the British engineer Christopher Cockerell in the early 1950s.