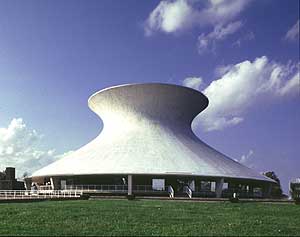 A hyperboloid is a quadratic surface of which there are two basic forms: a hyperboloid of one sheet, generated by spinning a hyperbola around its conjugate axis, and a hyperboloid of two sheets produced by rotating a hyperbola about its transverse axis. The hyperboloid of one sheet, first described by Archimedes, has some particularly remarkable properties. In 1669 Christopher Wren, the architect who designed St. Paul's Cathedral in London, showed that this kind if hyperboloid is what mathematicians now call a ruled surface – a surface composed of infinitely many straight lines. This fact enables a close approximation to a hyperboloid to be made in the form of a string model. Two circular disks, of the same size, are held parallel, one exactly above the other, by a framework. Strings are then run through holes near the circumference of one circle to corresponding holes in the other circle that are a fixed distance further around the circumference. Each string is perfectly straight but the surface that emerges takes the curved form of a hyperboloid. For the same reason, a cube spun rapidly on one of its corners will appear to describe a hyperbolic curve when viewed side-on.

Hyperboloids are seen in the man-made world in the form of cooling towers at power stations and, most strikingly, in the shape of the McDonnell Planetarium in St. Louis, Missouri (shown above). The designer of this building, Gyo Obata, chose the surface because the hyperbolic paths of some comets suggest "the drama and excitement of space exploration."