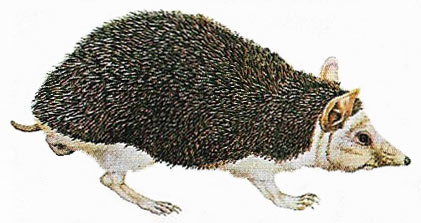 A coat of spines protects the long-eared hedgehog, which lives in dry regions ranging from the North East to Mongolia. The hedgehog hunts by night and rests in a burrow during the day.

The Insectivora are a small order of carnivorous mammals (class Mammalia) that includes the shrews, hedgehogs,and moles. Insectivores are the most primitive living mammals. All are small and have long skulls, pointed snouts, often with prominent whiskers, small brains, sharp teeth, and five-clawed feet. Three families are always placed in the order: Erinaceidae, comprising mole rats, gymures, and hedgehogs; Talpidae, comprising moles, shrew moles, and desmans; and Soricidae, the shrews. Six other families – including tree shrews, tenrecs, and solenodons – are also often included in the order.

Fossil insectivores are known from the rocks of the Mesozoic era. These creatures shared their world with the dinosaurs, but they and their descendants survived when the great reptiles died out. Today, members of the Insectivora are found in all parts of the world except for the polar regions and Australasia (where the insect-eaters are monotremes and marsupials) and live in a wide range of habitats from mountains to lowland rivers, and from tundra to tropical forest.

Most widespread are the ever-hungry shrews, the smallest of all mammals. Somewhat larger, though no less voracious, are the moles. Moles are all burrowing animals that loosen the soil with their short, powerful forelimbs and shoulder their way through to consolidate a tunnel round their bodies. Still larger are the hedgehogs, which are native only to the Old World. They are protected by a coat of spines that has the advantage, rare in animal armor, of being fairly lightweight. The porcupine, among the rodents, has the same kind of protection, but there is no close relation between it and the hedgehog.