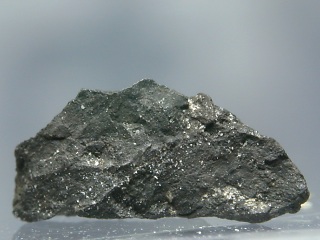 The Ivuna meteorite is a 0.7-kg carbonaceous chondrite (type CI1, see below) which landed near Ivuna, Tanzania, on Dec 16, 1938. It was subsequently split into a number of samples.

Ivuna was one of four meteorites, including the Orgueil meteorite, in which Bartholomew Nagy and George Claus1 claimed to have found evidence of primitive extraterrestrial fossils. Subsequent analysis led to this claim being discredited. However, in 2001, investigation by a team from the Scripps Institution of Oceanography, the Leiden Observatory in the Netherlands, and the NASA Ames Research Center,2 showed the presence in Ivuna of two simple amino acids, glycine and beta-alanine, and linked Ivuna with a likely origin in the nucleus of a comet. For more on this discovery and its implications, see the entry for the Orgueil meteorite.

In Jun 2008, the largest specimen of the Ivuna meteorite was bought by the Natural History Museum (NHM) in London from a private collector in the US. Most of the other specimens are held by private collectors or by the Tanzanian government. Before being put on display, the NHM's Ivuna fragment will be taken to NASA's Johnson Space Center, where a 20-g piece will be removed and subdivided into two 10-g pieces. One of these pieces will be set aside, while the other will be further divided into 200-mg allocations for various teams of researchers to study.

Ivuna is one of only nine known meteorites that are classified as type CI1 carbonaceous chondrites. These meteorites contain 'heavy elements' (i.e., elements other than hydrogen and helium) in nearly the same abundances as in the Sun, which means that they are essentially unaltered since they were formed at about the same time as the solar system itself, some 4.6 billion yr ago. The designation CI1 indicates that Ivuna underwent a high degree of aqueous alteration (or chemical change due to the presence of water). This alteration took place in the parent body of the meteorite at low temperatures, probably in the range of 20–50°C, and in a water-rich environment. By contrast, ordinary chondrites have experienced thermal metamorphism under dry conditions in a temperature range of 600–900°C.

CI1 type meteorites are very dark, because of their high carbon content, contain a high proportion of of iron-rich clays or phyllosilicates, and have very fine grain size. In Ivuna, there is also a complete absence of chondrules, owing to the fact that they have all been altered to clays and iron oxides.