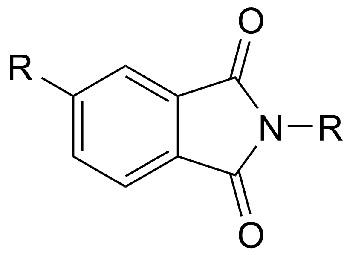 General structure of an organic imide.

In organic chemistry, imides are nitrogen-containing ring compounds of general formula R.CO.NH.CO.R'. They are formed by reacting an amide with an acid chloride, or ammonia with an acid anhydride. The hydrogen atom of the NH group is acidic and can be replaced by a metal. Mild hydrolysis breaks the ring to give the half amide of the acid. Organic imides are used in synthesis.

In inorganic chemistry, the term refers to compounds containing the NH2- ion or the –NH group. These are prepared by the action of heat on amides or by metathetical reactions in liquid ammonia. The heavy metal imides are explosive.