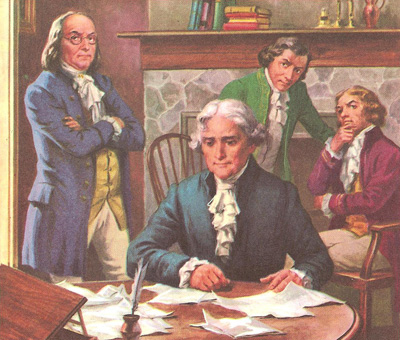 Jefferson was 33 when he drafted the Declaration of Independence in 1776. Benjamin Franklin was one of the delegates who helped him revise the draft.

Thomas Jefferson was the third President of the United States and author of the Declaration of Independence. On his tomb are written these words: "Here was buried Thomas Jefferson, Author of the Declaration of Independence, of the statute of Virginia for Religious Freedom, and Father of the University of Virginia." Since Jefferson himself composed this inscription, we at least know what he wanted to be remembered by!

Of all American statesmen, Jefferson is one of the most attractive and remarkable. His was a charming personality – sincere, modest, with an insatiable curiosity. In addition to being a deep thinker about politics, philosophy, religion, and economics, and a great writer of the English language, he was interested in every aspect of architecture, art, and science. He enjoyed nothing more than inventing things himself and working with his own hands. He always believed in applying theories to life. In his old age he wrote: "I am not fond of reading what is merely abstract, and unapplied immediately to some useful science."

Despite Jefferson's great achievements as a statesman, he is, above all, important for his view of human life. He was a Liberal and had a vision of America as a land of free men. Individuals were for Jefferson more important than abstract notions like 'the state' and 'society'.

Jefferson was born in Albemarle County, Virginia, in 1743, where his father had a small estate on the edge of the frontier wilderness. The Jeffersons came originally from Wales; they were an old Virginian family, but not one of the most important. Much grander were his mother's family, the Randolphs, who had large estates and great wealth. Thomas studied at William and Mary College in Williamsburg, which had been designed by Sir Christopher Wren, and he afterwards took up law. He was a popular figure in Virginian society, being an excellent athlete and horseman and an accomplished violinist.

In 1769 Jefferson was elected to the House of Burgesses – Virginia's parliament. These were exciting days in the political life of the colony; the quarrel with England over the right of the mother country to control the government of the American colonies was coming to a head. Jefferson naturally found himself on the side of the American patriots and liberals. He heard Patrick Henry's impassioned speech which ended with the words: "Give me liberty or give me death." After the outbreak of the American War of Independence in 1776, Jefferson represented Virginia in the Continental Congress at Philadelphia.

On Jul 4,1776 Jefferson's draft of the Declaration on Independence was accepted by Congress. This immortal document was, as Jefferson said, the "expression of the American mind". The most famous passage reads: "We hold these truths to be self-evident: that all men are created equal; that they are endowed by their Creator with certain unalienable rights; that among these are life, liberty, and the pursuit of happiness."

Jefferson, like most Americans at that time, didn't want to break with England. He wanted America to be a self-governing country within the Empire, like the remaining Commonwealth countries today. But George III refused to treat the American colonists like adults and for this reason he lost their loyalty. Later, when Jefferson was American minister to France, he met George III in London; the King was rude to him and Jefferson wrote in his autobiography of "the ulcerations in the narrow mind of that mulish being".

Jefferson took no active part in the campaigns of the War of Independence. Instead, he was engaged in Virginian politics, and in 1779 was elected Governor of Virginia at the age of 36. As governor, he introduced many liberal measures such as religious freedom, public education, and fairer inheritance laws. He wanted America to be an agricultural country with as many people owning property as possible. He believed in individual freedom and equality. The great enemy of his ideas was Alexander Hamilton, who wanted America to become a powerful industrial country with a rich governing class and plenty of cheap labor. The ideas and influence of these two men had a lasting effect on US politics.

Jefferson created the monetary system which is in use in the United States today. He succeeded Benjamin Franklin as American minister to France; he held office as Secretary of State and Vice-president, and in 1800 he was elected President of the United States. He served two terms, and in 1809 he retired to his beloved home, Monticello. One of his achievements as President was the Louisiana Purchase; in 1803, for the sum of 15,000,000 dollars, he bought from France a tract of land which doubled the size of the United States.


Jefferson and ... the debate about other worlds

Jefferson accepted pluralism and had books in his library on the subject by Fontanelle, Huygens, and Derham. See also Adams, John.