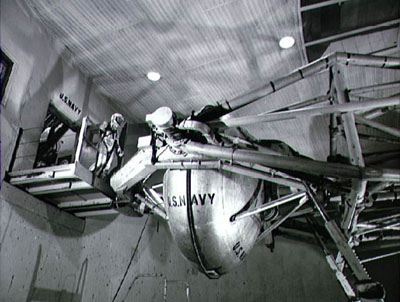 The Johnsville Centrifuge was a facility at the Aviation Medical Acceleration Laboratory of the Navy Air Development Center, Johnsville, Pennsylvania, used throughout the early American space program; it was the most powerful centrifuge then in existence. With a 17-m radius, it had a rate change of 10g/s and could reach 40 g/s. The 3 by 1.8-m-diameter gimbal-mounted gondola was fully air-conditioned.

Although the centrifuge itself (including its 4,000 hp electric motor) has been decommissioned for the past decade or so, it is in private hands and a science museum has opened in Warminster, Pennsylvania, with the historic centrifuge as its prime attraction. Also on display is a collection of artifacts including the gondola and contour couch used by Deke Slayton in the centrifuge, and the Mayo Tank – a precursor to the "Iron Maiden" that was used test the effectiveness of water as a buffer to high G forces.