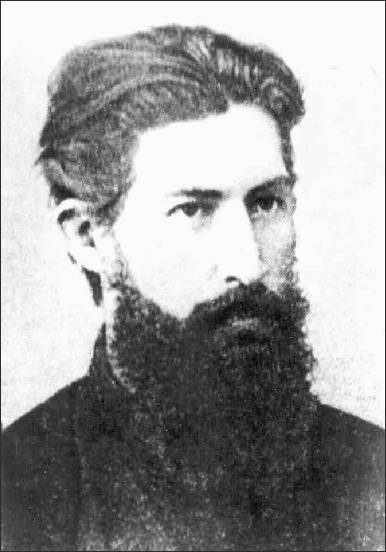 Nikolai Kibalchich was a Russian medical student, journalist, and revolutionary who may have been the first person in history to propose using rocket power as a means of transport in space. Kibalchich had attempted several times to kill Czar Alexander II who, ironically, had tried to introduce reforms in Russia during his reign. Along with his accomplices, Kibalchich finally succeeded in assassinating the Czar on Mar 13, 1881, and was himself put to death on April 3, at the age of 27. While in prison, awaiting execution, Kibalchich wrote a remarkable paper illustrating the principle of space propulsion. In it, he describes a means of propelling a platform by igniting gunpowder cartridges in a rocket chamber. Changing the direction of the rocket's axis, he realized, would alter the vehicle's flight path. In his notes, he explains:

I am writing this project in prison, a few days before my death. I believe in the practicability of my idea and this faith supports me in my desperate plight.

He was a close contemporary of two other rocket pioneers, his compatriot Konstantin Tsiolkovsky and the German Hermann Ganswindt. The great American rocketeer Robert Goddard was born a year after Kibalchich's execution.

The device that Kibalchich described consisted of a platform with a hole in the center, above which was mounted a breech-loaded rocket motor. The motor was fed, machine-gun fashion, with charges of compressed powder, the thrust being varied either by altering the size of the cartridges or the speed at which they were fed into the chamber. Take-off was vertical, with the chamber firing through the hole. As soon as sufficient altitude was reached the chamber would be rotated through 90 degrees for horizontal flight. The propulsion arrangement of this unusual craft foreshadowed some of the vertical take-off aircraft which began to be developed in the second half of the twentieth century.