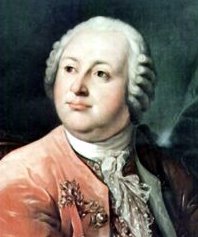 Mikhail Lomonosov was a Russian writer, chemist, and astronomer, sometimes referred to as the father of Russian science. He helped found the University of Moscow (1755) and formulated Russian classical literary theory in his Letter on the Rules of Russian Versification (1739).

Lomonosov is best known for his corpuscular theory of matter, in the course of the development of which he made an early statement of the kinetic theory. He was also the first to obtain direct evidence that Venus has an atmosphere. In 1761, at the University Observatory in St Petersburg, Lomonosov observed a transit of Venus with the intention of finding the planet's diameter by measuring the size of its dark outline. He was able to determine that Venus is similar in diameter to Earth, but the precision of his measurement was hampered by the fact that the edge of the planet's disk, instead of appearing sharp, as he'd expected, was fuzzy and indistinct. From this, Lomonosov concluded that Venus has "an atmosphere equal to, if not greater than, that which envelops our earthly sphere."

Lomonosov was deeply impressed by Fontanelle's writings on pluralism and, in the face of opposition from the Eastern Orthodox Church, expressed his belief in many inhabited worlds in his native country. He wrote pluralist poems, both scientific and satirical, and, more importantly, saw to it that the second edition of Fontanelle's Conversations on the Plurality of Worlds was translated into Russian. In this way, he may have had an important influence on future Russian scientists, including Otto Struve, who played a part in the modern search for extraterrestrial planets and life.