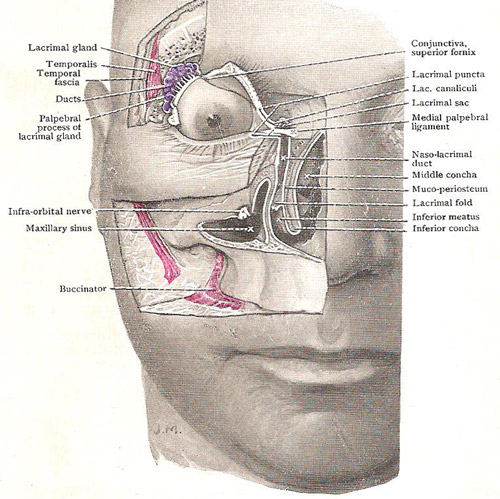 Dissection of the lacrimal apparatus.

The following structures are included in the lacrimal apparatus:

The lacrimal gland lies in the orbit. Part of it, called the palpedral process, extends down into the lateral part of the eyelid between the conjunctiva and the palpebral fascia, and may be seen bulging the conjunctiva when the lid is everted.

The ducts of the lacrimal gland – a dozen or less – are short and slender. They open on the lateral part of the upper lid near the superior fornix and the conjunctiva.

The conjunctiva is a moist membrane with an epithelial covering. It lines the deep surface of each eyelid, where it is thicker and more vascular; at the root of the eyelid, it is reflected on to the eyeball, forming a fornix, and covers the anterior part of the sclera, where it is thin and transparent. The conjunctiva as a whole is called the conjunctival sac, which is closed when the eye is shut. The cavity of the sac is the capillary interval between the ocular and palpebral conjunctiva and contains only enough lacrimal fluid to keep the surface moist. The cavity opens on to the exterior through the palpebral fissure, and communicates with the lacrimal sac through the canaliculi.

These are the two slender tubes, less than half an inch in length, that lie in the medial part of the margins of the two eyelids. Each begins on the summit of a lacrimal papilla, where it appears as the black speck known as lacrimal punctum. From the punctum, it runs medially to open into the lacrimal sac under cover of the medial palpebral ligament.

The lacrimal sac lies in the lacrimal groove on the medial wall of the orbit, just within the medial orbital margin, behind the medial palpebral ligament. The sac is about half an inch long and quarter of an inch wide. Its upper end is blind; its lower end is continuous with the nasolacrimal duct.

This tube is about half an inch long, and of the same width as the sac. It begins at the anteromedial corner of the floor of the orbit, and passes downwards and slightly backwards and laterally, through the nasolacrimal canal, to end in the inferior meatus of the nasal cavity. At the medial side of its opening, the mucous membrane is pinched up to form the lacrimal fold, which acts as a flap-valve to prevent the secretion of the nose from being driven up into the duct.

The liquid secreted by the lacrimal gland passes by the ducts of the gland into the conjunctival sac. It flows downwards over the eyeball and is carried also medially by the involuntary movements of the eyelids, which move towards the nose as well as towards each other; that arrangement, combined with capillary attraction, ensures that the whole front of the eye is moistened.

The lacrimal gland may sometimes have to be removed. The conjunctiva is then kept moist by the increased activity of minute accessory lacrimal glands that lie near the fornices.