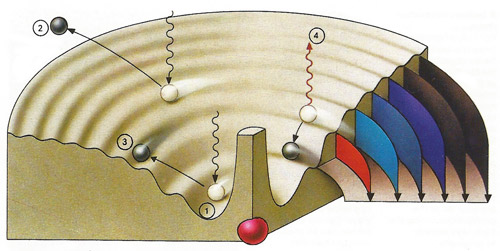 Light production can occur when electrons accelerate or when atoms lose energy. In an atom an electron can be pictured as circling the nucleus in a certain orbit (1). If the atom absorbs energy the electron may escape (2) or move to a higher orbit (3). It may then fall to a lower one, giving out visible (4) or invisible radiation depending on the energy gap between the two orbits. 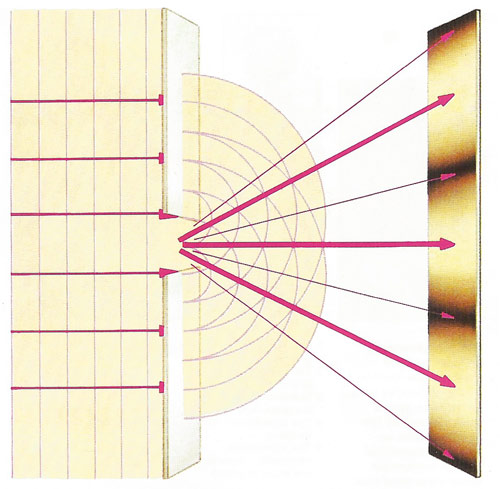 Diffraction occurs when a wave passes an edge, causing it to spread around that edge. Often this effect is too slight to be noticed, but it is marked when waves pass through an opening of the same size as the wavelength (with light, about 55 millionths of a cm). The light waves spread out from the edges of the opening and patterns of light and dark are formed where they cross. 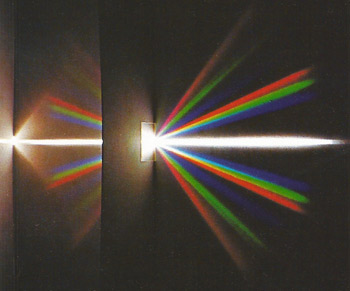 A diffraction grating has a fine mesh. When white light passes through it is bent in many directions and split up into a spectrum of colours: each wavelength is bent a different amount. 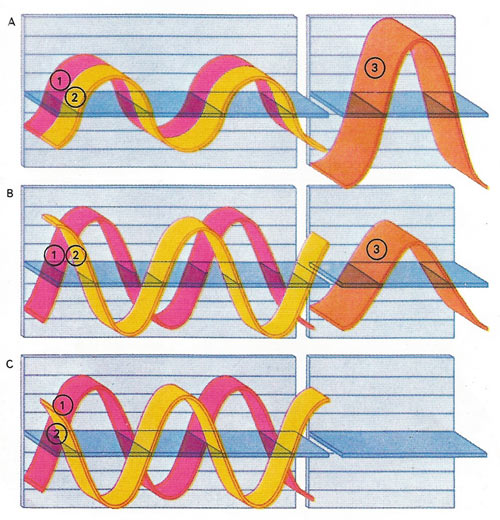 Interference occurs when two waves of the same wavelength [1, 2] travel over the same path. The waves interact to give a new light wave [3]. If the waves are in phase [A] the new wave is brighter than either of the original waves. If they are slightly out of phase [B] the new wave has about the same brightness as the original waves. If they are totally out of phase [C] the peaks and troughs cancel each other out and so no new wave is produced. 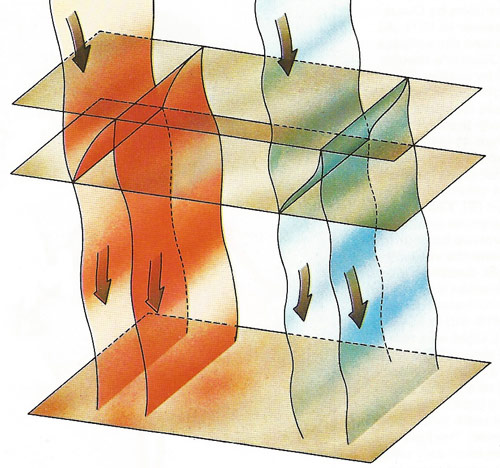 A thin film, such as a soap bubbles or oil film, glistens with color. Part of the light passing through the film is reflected between the inner surfaces of the film and emerges to interfere with the rest of the light that passed straight through. Traveling paths of different lengths, some of the waves are in phase and reinforce each other [red] while others [blue] cancel each other out and are not seen. 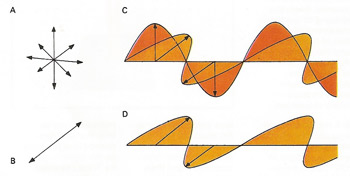 In the 17th century, scientists were divided in their opinions about the nature of light. Some believed it to be made up of streams of particles of some kind, while others argued that it consisted of waves. Reflection was easy to explain by the particle theory; it could be pictured as a bouncing of particles off surfaces rather as balls bounce from the sides of a pool table. (The modern form of this theory envisages light traveling as packets of energy called photons.) Refraction was more difficult to explain – why should some particles bounce off and others pass through a surface? Other effects were impossible to account for by the particle theory and the wave nature of light became accepted as more convincing.

In those early days no one knew exactly what vibrated in light to make it behave as a wave motion, nor how the waves could be produced. These problems began to be solved in the 1870s. It was discovered that a light wave consists of vibrating electric and magnetic fields traveling through space; the two fields vibrate at right-angles to each other and to the direction of motion. In fact light waves are part of a whole group of electromagnetic waves that include X-rays, ultraviolet rays, infrared rays, and radio waves. Light waves can be produced by changing the orbits of electrons inside atoms. If an atom receives energy in some way – perhaps as heat, light or electrical energy, for example – the electrons move away from the nucleus to orbits of higher energy. They then jump to a lower energy orbit and give out energy if the form of electromagnetic waves as they do so. In this way objects produce light.

Light spreads out from any point producing it or reflecting it in ever-expanding spheres, rather as ripples spread out in circles over a pond. Each ray of light can be thought of as moving in a straight line, producing a continuous series of ever-expanding vibrational movements through space. In all the rays leaving a point the vibrations add up to give a set of spherical wavefronts consisting of alternate peaks and troughs of energy. Each peak and trough are maxima of vibration but in opposite directions.

The shadow of an object is rarely seen to have sharp edges, but this is because a source of light always has a certain size. If the source were infinitely small we would expect it to give shadows that are totally sharp because light rays are considered as straight lines, but this is not so. All waves spread round the edges of an object – an effect called diffraction. In the case of light the edge is illuminated and points close to it can act as sources of light waves that spread out in all directions so that the rays are effectively bent by the edge. The wavelength of light is so short that this effect is hard to detect at edges, but it becomes clearly apparent when light passes through very small openings about the same size as the wavelength. This happens in a diffraction grating in which light passes through or is reflected from extremely narrow slits.

The wavefronts that spread out from the two edges of the opening cross each other. Where two peaks of the wave meet, an increase in brightness occurs, but where a peak meets a trough they cancel each other out so that no vibration occurs and there is no light. As a result a series of light and dark fringes is produced instead of a single image of the opening. This effect, in which waves reinforce each other or cancel each other out, is called interference.

If a ray of light is divided into two rays that later recombine then interference effects are seen if one of the divided rays travels a longer path than the other before the recombination. The peaks and troughs may be out of phase (not exactly together) and the light is affected. This happens between two surfaces that are very close together, as in a thin film or two pieces of glass pressed together, and it produces colorful fringed patterns. The iridescent colors seen in the plumage of some birds and some butterflies' wings are produced by the phenomenon of interference; the fine structure of the feather or wing resembles either a diffraction grating or a thin film.

Because interference can be produced by a path difference of only a wavelength or so, interference effects can be used to detect very small changes in length. Interferometers are used for this purpose. They produce interference by dividing a ray of light into two or more beams and then recombining them.

Another effect to be seen with light waves is polarization. In an ordinary light wave the electric and magnetic fields vibrate in many randomly oriented planes about the direction of wave motion; in polarized light they vibrate in only one plane. Light is polarized by passing it through a filter that cuts out all vibrations except those in one particular plane. The polarized beam will then pass through a second filter only if it is set at the correct angle to allow the vibrations through. Otherwise the beam is stopped. Light reflected from surfaces at certain angles is polarized, and polarizing sunglasses cut out glare by stopping reflected beams in this way. Solutions of some chemical substances, such as various sugars, rotate the plane of polarization of light passing through them. The effect is used in chemistry for analyzing such solutions.