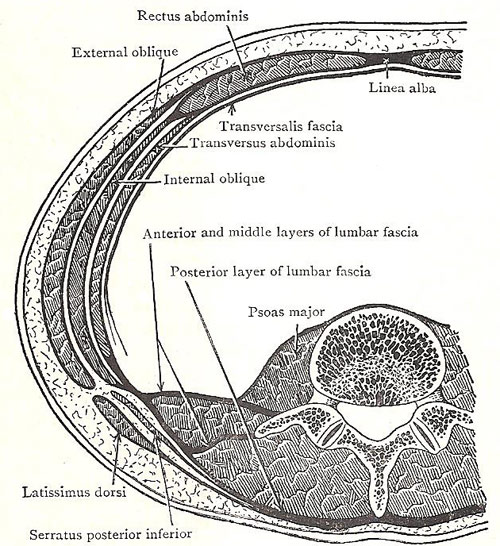 The lumbar fascia is a membranous sheet, almost aponeurotic in character, not limited to the lumbar region (as the name suggests) but also extending downwards over the muscles on the back of the sacrum and upwards over the back of the thorax to the neck. It is thin in the thoracic portion of its extent, but thick and strong in the lumbar and sacral regions. In all three regions it binds down the deep muscles of the back to the sides of the spines and to the transverse processes of the vertebrae.

The thoracic part is a thin, transparent lamina which extends from the tips of the spines and the supraspinous ligaments to the angles of the ribs. At the upper end of the thoracic region, it dips beneath the serratis posterior superior and extends into the neck; at the lower end, it blends with the aponeurosis of origin of the serratus posterior inferior, and, through that, becomes continuous with the posterior layer of the lumbar portion of the fascia. The lumbar part is separable into three lamellae - a posterior, a middle, and an anterior. The anterior and middle layers enclose the quadratus lumborum muscle, which lies alongside the lumbar transverse processes; and the two layers are attached to these processes. Laterally, they unite together at the lateral margin of the quadratus, and give origin to part of the transversus abdominis. The posterior layer is by far the strongest, and covers the sacrospinalis, i.e., the great mass of muscle in the loin. It is attached medially to the lumbar spines; laterally, it blends with the back of the middle layer of the lateral margin of the sacrospinalis; and, beyond their line of fusion, the middle layer gives origin to the uppermost part of the internal oblique muscle of the abdomen.