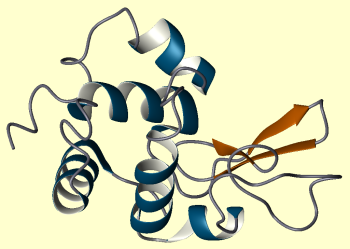 Lysozyme is an enzyme found in tears, saliva, sweat, nasal secretions, breast milk, and many tissues which acts as a strong anti-bacterial agent because it digests a substance in bacteria cell walls called peptidoglycan. Lysozyme (1,4-β-N-acetylmuramidase) is composed of 129 amino acids folded in both alpha helices and anti-parallel hairpins.

Lysozyme was discovered by Alexander Fleming in 1921 when he demonstrated that his own nasal mucus had the ability to inhibit the growth of a certain strain of bacteria in culture. He realized that this was largely due to the action of a protein within the mucus that caused the bacterial cells to lyse or break apart. Hence, he named the protein lysozyme.