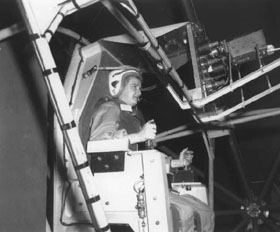 Jerrie Cobb takes a spin in the MASTIF in 1960.

MASTIF (Multiple Axis Space Test Inertia Facility) was a three-axis gimbal rig, built by the Lewis Research Center (now the Glenn Research Center), which simulated tumble-type maneuvers that might be encountered during a space mission. Three tubular aluminum cages could revolve separately or in combination to give roll, pitch, and yaw motions at speeds, up to 30 rpm, greater than those expected in actual spaceflight. Nitrogen-gas jets, attached to the three cages, controlled the motion. At the center of the innermost cage, the pilot was strapped into a plastic seat, similar to that in a Mercury capsule. His head, body, and legs were held in place, leaving only his arms free. The pilot actuated the jets by means of a right-hand control column. Communication was by radio which was operated by a button atop the left-hand column. Complex tumbling motions were started by the operator at the control station and control then switched to the pilot. By reading instruments mounted at eye level before him, the pilot interpreted his motions and made corrections accordingly.

From February 15 to March 4, 1960, MASTIF provided training for all seven Mercury Project astronauts. Each experienced about five hours of 'flight time.' Later that year, a set of women pilots also used the device as part of a broader assessment of abilities (see Mercury Thirteen). In addition, the rig was used to evaluate instrument control systems for spaceflight and to study the physiological effects of spinning, such as eye oscillation and motion sickness.