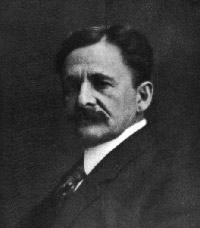 Albert Michelson was a German-born US physicist. In 1887 he conducted an experiment with Edward Morley to determine the velocity of the Earth through the ether, using an interferometer of his own design. The result of the Michelson-Morley experiment is now seen as a key piece of evidence for the special theory of relativity. Michelson also determined the speed of light and became the first US physicist to win a Nobel Prize, receiving the 1907 award in physics.