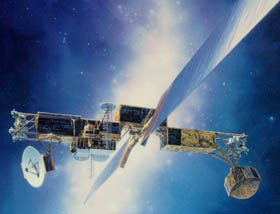 Milstar (Military Strategic and Tactical Relay satellite) is a series of advanced American military satellites designed to provide survivable, global jam-resistant communications for command and control of strategic and tactical forces through all levels of conflict. Each Milstar satellite serves as a smart switchboard in space by directing traffic from ground terminal to ground terminal anywhere on Earth. Since the satellite actually processes the communications signal and can link with other Milstar satellites through crosslinks, the need for ground-controlled switching is much reduced.

The operational Milstar satellite constellation consists of five satellites positioned around the Earth in geosynchronous orbits. Each mid-latitude satellite weighs approximately 10,000 lb (4,536 kg) and has a design life of 10 years. Until recently, the program was plagued with fiscal and technical problems.

The first and second Milstar 1 satellites were launched in 1994-1995. However, the first of a new generation of Milstar satellites was placed in a useless orbit because of a flight software error in its Centaur upper stage during launch on 30 April 1999. With the satellite costing about $800 million, and the launcher a further $433 million, this is believed to be the most expensive unmanned loss in the history of Cape Canaveral launch operations. The second, third, and fourth Milstar 2 satellites were, however, successfully delivered into their intended orbits, on 27 February 2001, 15 January 2002, and 8 April 2003, respectively, by Delta-4(01)B Centaur T launch vehicles.