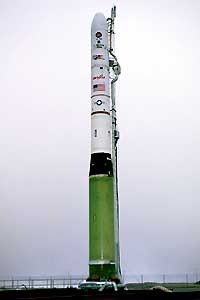 Minotaur can place up to 340 kg into a 740-km sun-synchronous orbit – a payload about 50% greater than that of the Pegasus XL alone. Its first successful operational launch was on Jan 26, 2000, from Vandenberg Air Force Base, when it placed the JAWSAT payload adaptor, carrying several microsatellites, into orbit.

As of mid-2006, Minotaur had successfully delivered 20 satellites into space during five launches, the most recent in Apr 2006 when it deployed six spacecraft for a joint Taiwan-US atmospheric research project. In May 2006, two Minotaurs were ordered to loft the US Air Force Research Laboratory's TacSat 2 and TacSat 3 satellites. The first is scheduled for launch in Nov 2006; the second will follow in Sep 2007.