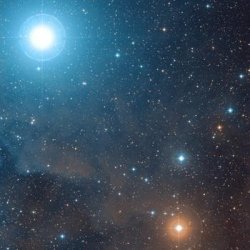 Mintaka (Delta Orionis) is the seventh brightest star in the constellation Orion and the westernmost and faintest star in Orion's Belt; its Arabic name means "the belt of the Central One." Mintaka is a multiple star system, the main components of which are a hot (30,000 K) B star and an even hotter O star, each with a mass of over 20 solar masses and a luminosity 70,000 times that of the Sun. These bright stars form a compact visual binary, with a period of 5.73 days and a maximum separation of 0.3", and also an Algol star system showing a dip of about 0.2 magnitude during mid-partial eclipse. Two much dimmer and remote companions trek around the central O-B couple. A magnitude 6.8 B star orbits at a distance of about 0.25 light-year, while, closer in, circles a magnitude 14 component.

Mintaka is famous as a background against which the thin gas of interstellar space was first detected, when the German astronomer Johannes Hartmann (1865–1936) in 1904 discovered absorption in the star's spectrum that could not be produced by the orbiting pair.