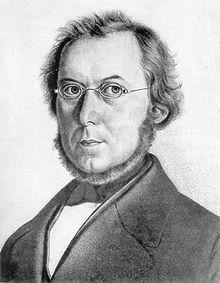 Hugo von Mohl was a German botanist who did pioneering research into the anatomy and physiology of plant cells. He formulated the idea that the cell nucleus is surrounded by a granular, colloidal substance, which in 1846 he called protoplasm, although the term had been invented by Jan Purkinje (1787–1869) in reference to the embryonic material in eggs. Von Mohl was the first to propose that new cells arise from cell division. In 1851 he claimed that the secondary wall of a plant cell is fibrous, and this was subsequently confirmed. He also gave the first distinct account of the function of osmosis.