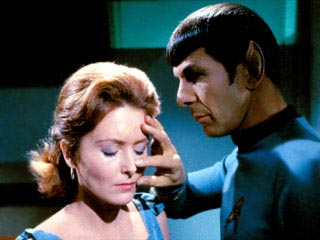 Science fiction has been dealing with the theme of humans merging with machines and ofindividuals being 'taken over' by alien collectives for the best part of a century. In some cases the absorption of the individual into a larger mind or awareness is seen as an inevitable and generally positive stage of evolution, as in the case of Olaf Stapledon's writings (especially Last and First Men and Starmaker) or Arthur C. Clarke's Childhood's End. In other scenarios, the forcible stripping away of individuality and absorption of people into a group mind is portrayed as the ultimate horror. Star Trek's Borg and Doctor Who's cybermen are familiar examples on television, while American sci-fi cinema of the 1950s, tapping into a fear of the spread of communism that was rampant at the time, spawned such films as Invaders From Mars and Invasion of the Body Snatchers.

In more recent times, science fiction writers and filmmakers have explored many of the possibilities of humans interfacing with digital worlds, for better or worse. Dystopian outcomes are portrayed in The Matrix and William Gibson's Neuromancer, while, the Scottish author Iain M. Banks explored a technology for joining living brains to a vast, interstellar dataverse that's now being seen as having real potential for development.

A mind-meld is also a procedure carried out by Vulcans in the fictional universe of Star Trek. It involves the temporary creation of a shared consciousness, usually through direct physical contact.