The molecules in a drop of very dilute stearic acid spread over the clean water surface to form a patch one molecule thick. 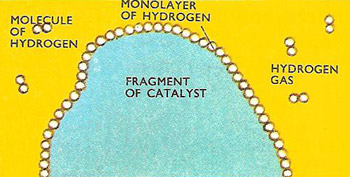 Section of a fragment of metal which has adsorbed a monolayer of hydrogen on to its surface.

Section of a fragment of metal which has adsorbed a monolayer of hydrogen on to its surface.

Some surfaces tend to gather on them layers of other molecules. If these molecules are packed closely side by side and the layer is only one molecule thick, then it is called a monolayer.

Most objects are covered with a somewhat patchy monolayer of air. Although there are considerable spaces between ordinary air molecules, in the monolayer the molecules are closely packed with no spaces between them.

Some catalysts enable chemical reactions to take place more easily by adsorbing (see adsorption monolayers of the reacting gases on to their surfaces. Over a small area the molecules of the gases are brought into close contact so that they can react. This can eliminate the need for using high temperatures and pressures to achieve the same effect. To work well, as much of the reacting gas as possible must be made to form monolayers and consequently the catalysts must present a large surface area to the gas. Because of this, the catalyst is usually in the form of very fine particles.

Some liquids also tend to spread in thin layers. Dirty puddles with rainbowed surfaces have a thin layer of oil floating on them. The layer will probably be several molecules thick, but if the puddle is large enough and the drop of oil small enough, the oil will spread until it is only one molecule thick.

A similar thing happens when a droplet of stearic acid solution (an acid derived from fat) is put onto a clean water surface. The acid spreads outward and outward and when the layer is one molecule thick it stops spreading and the patch stops growing in size. This patch can be broken up into fragments, but the molecules cannot be made to space themselves evenly over the whole surface. They remain packed closely side by side so that there are patches of monolayer and other patches of completely free surface.

Experiments can be designed using layers like this to gauge the size of molecules.

A little stearic acid can be weighed and dissolved in a liter of benzene. From the density of the stearic acid it is possible to calculate its volume. Benzene is chosen as a solvent because it will easily evaporate off later. Some of this solution can be accurately measured out and again diluted with benzene. By successive dilutions, it is possible to make a very dilute solution whose composition is accurately known.

One droplet of this solution containing say 0.00001 milliliter of stearic acid will spread over an area of about 50 square centimeters of water surface.

Stearic acid has a carbon chain structure and an acidic group linked to one end. When the experiment is repeated using molecules one carbon atom longer, the same volume of acid spreads over the same area and the layer is about 1.5 Å thicker. The layer thickness increases by the same amount for every carbon atom added to the chain, but the area it spreads over remains the same.

It looks as though the chains are arranged upright in the surface and the carbon atoms are about 1.5 Å apart. This must be so, as the surface area remains unchanged by altering the length of the carbon chains.