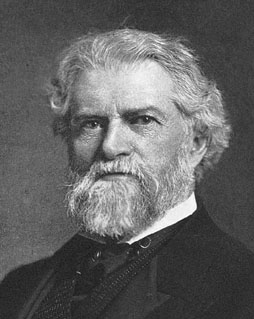 Simon Newcomb was a brilliant Canadian-born American mathematical astronomer whose work on the orbital motion of the planets of the Solar System was the cornerstone of the nautical and astronomical almanacs of the United States and Britain until as recently as 1984; his accomplishments are all the more remarkable because he was almost entirely self-taught. At age 18, with little money or schooling, Newcomb made his way on foot from his native Nova Scotia to the United States. Eventually he found employment as a computer with the Nautical Almanac Office (then in Cambridge, Massachusetts) and earned a BS at Harvard. He rose to become, in 1877, superintendant of the Nautical Almanac Office, later part of the US Naval Observatory, and served concurrently as professor of mathematics and astronomy at Johns Hopkins University. He used carefully analyzed measurements of stellar and planetary positions to compute motions of the Sun, Moon, planets, and satellites, and also measured the speed of light and the constant of precession. His values for the fundamental constants of astronomy were used by the world's almanac makers for decades. A profuse writer on mathematics, economics, and other subjects, Newcomb also provided important guidance on the construction of some the world's largest telescopes and was a leader in American science. He was the first president of the American Astronomical Society and the American Society for Psychical Research, and also served as president of the American Mathematical Society, the American Association for the Advancement of Science, the Philosophical Society of Washington, and other organizations.

On the subject of other life and intelligence in the Universe, Newcomb was non-committal, but he argued against the anthropocentric ideas of Alfred Russell Wallace and was prepared to accept the possibility that Earthlike conditions may not be essential for the development of life. In the debate over the existence of the Martian canals, Newcomb made a significant contribution with his experiments involving artificial disks and his conclusion that any linear markings were probably optical illusions.