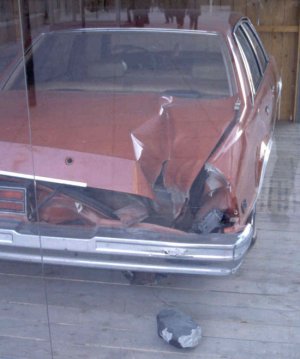 The Peekskill meteorite is a 12.4-kg meteorite, classified as an H6 chondrite, that fell in Peekskill, New York, on October 9, 1992, penetrating the trunk of a 1980 Chevy Malibu that was sitting in its driveway. The descent of the space rock was witnessed by thousands in the eastern United States as a brilliant fireball and was caught on at least 14 amateur videotapes.

First seen over Kentucky, it traveled in a near-grazing trajectory, of only 3.4° for more than 700 km in a north-northeasterly direction for at least 40 sec, before landing. A sonic boom was heard as it broke into over 70 pieces, one of which impacted Michelle Knapp's red Malibu coupe outside her home. When police arrived on the scene they filed a report for criminal mischief. The smell of gas from the punctured gas tank finally prompted the fire department to investigate, at which time they found the culprit. The stone was impounded by the police and subsequently fractured to see what was inside before being returned to its rightful owner.

Analysis of its recorded descent enabled a pre-atmospheric velocity of 14.72 km/s to be calculated, together with orbital parameters (perihelion 0.886 AU, aphelion 2.1 AU). Only a few other meteorite falls have corresponding photographic references enabling their orbits to be worked out, including the Lost City, Príbram, Innisfree, Tagish Lake, and Morávka meteorites. Peekskill was the first to be recovered following videotaped atmospheric passage. Through analysis of radionuclides and cosmic-ray tracks, a cosmic-ray exposure age of 32 million years was obtained for the Peekskill rock that experienced a two-stage exposure history. During the first stage the sample was located 20 to 25 cm deep on a meteoroid having a radius of 40 to 60 cm; during the second stage, lasting less than 200,000 years, the depth was greater than 7 cm within an overall radius of 25 to 40 cm. The meteorite and Malibu have been taken on tour to several countries including Germany, France, Japan, and Switzerland, as well as throughout the United States.