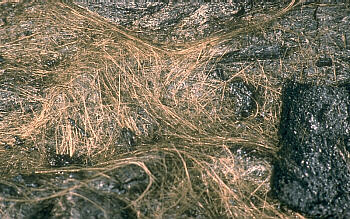 Hundreds of strands of Pele's hair intertwined on the surface of a pahoehoe flow at Kilauea Volcano, Hawaii. The glass strands were erupted from Mauna Ulu, a shield that formed on the east rift of Kilauea between 1969 and 1974. Credit: D. W. Peterson / US Geological Survey.

Pele's hair are thin strands of volcanic glass drawn out from molten lava, named for Pele, the Hawaiian goddess of volcanoes. A single strand, with a diameter of less than 0.5 mm, may be as long as 2 m. The strands are formed by the stretching or blowing-out of molten basaltic glass from lava, usually from lava fountains, lava cascades, and vigorous lava flows (for example, as pahoehoe lava plunges over a small cliff and at the front of an a'a flow). Pele's hair is often carried high into the air during fountaining, and wind can blow the glass threads several tens of kilometers from a vent.