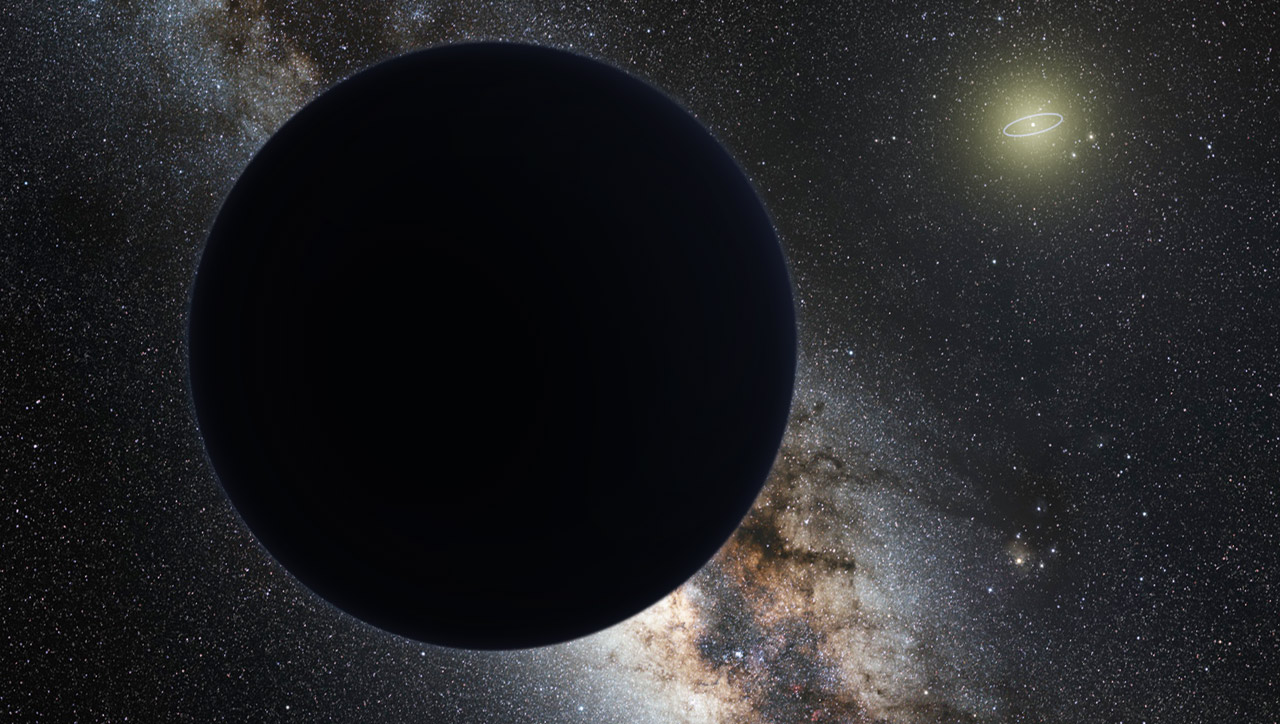 There are eight known planets in the Solar System now that Pluto has been downgraded to the status of a dwarf planet. But could there be a ninth planet, orbiting the Sun much further out?


Far beyond Neptune, more than 250 times the distance of Earth from the Sun, are a group of objects called ETNOs, or extreme trans-Neptunian objects. The orbits of these small bodies show an unusual clustering. Many ETNOs reach perihelia – their points of closest approach to the Sun – in the same part of the sky as seen from Earth and their orbits are tilted at a similar angle.


Some astronomers think that these similarities may be due to an observing bias because tracking ETNOs is difficult and some times of the year have been more favourable than others. But the alignments could also be caused by an undiscovered planet whose gravitational effects shepherd the orbits of ETNOs.


If Planet Nine is responsible for the orbital clusterings seen, it would probably have a mass somewhere between five and eight times that of Earth, placing it in the super-Earth category. Earlier calculations predicted it would have an elongated orbit that averaged somewhere between 400 and 800 times the distance of Earth from the Sun. In 2021, this estimate was refined towards or below the lower end. The best current value places hypothetical Planet Nine at an average distance from the Sun about 380 times further out than Earth.


If Planet Nine exists, where did it come from? One idea is that it's the rocky core of a giant planet that was thrown out of its original orbit by Jupiter in the early days of the Solar System. Other possibilities are that it was captured from another, passing star or that it was once a rogue planet wandering on its own through the galaxy.


No ninth planet was picked up by recent sky surveys such as those of the WISE spacecraft (NASA's Wide-field Infrared Survey Explorer) or the ground-based Pan-STARRS telescope. But that doesn't rule out its existence. Planet Nine could have characteristics or be in a location that these surveys would have missed.


Further searches of regions not covered by the earlier efforts are now being carried out by the 8-meter Subaru Telescope in Hawaii, operated by the National Astronomical Observatory of Japan, and the repurposed WISE mission, now known as NEOWISE, which focuses on objects within the Solar System. Of course, it may well turn out that there is no Planet Nine, in which case some other explanation will be needed to explain the observed clustering of trans-Neptunian objects.

Before Pluto was demoted to the status of a dwarf planet, there had been speculation about the possible existence of a "Planet X". What were thought to have been unexplained perturbations in the orbits of Neptune and Uranus, at the turn of the twentieth century, led to the search for a trans-Neptunian planet. But upon the discovery of Pluto the mystery only seemed to deepen. Pluto proved to have far too little mass to account for the wobbles thought to be present in the movements of Neptune and Uranus. Over the next few decades, speculation continued about the possible existence of Planet X. However, today, it seems clear that the supposed perturbations were fictitious and, therefore, that these were not valid grounds upon which to suspect that an additional planet was real. Speculation about Planet Nine is based on the disputed discovery of more recent anomalies in the orbits of trans-Neptunian objects.