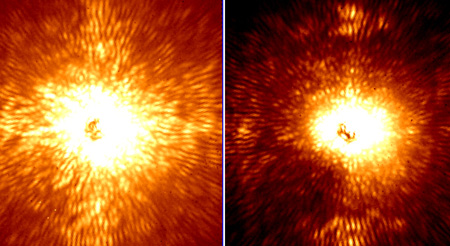 The nearby star HD 157728. In both these images of it, the star is centered but in the right image much of its light has been removed by an adaptive optics system and coronagraph belonging to Project 1640. 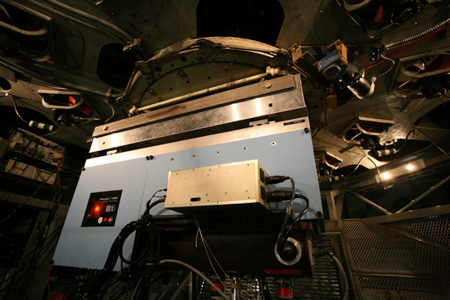 Project 1640 is a collaborative set of high-tech equipment and software, including adaptive optics and a coronagraph, which operates on the famous Hale Telescope at the Palomar Observatory near San Diego. Its purpose is to find planets going around other stars – exoplanets – by creating very precise 'dark holes' around a star in which planets, otherwise impossible to see in the star's glare, became visible.

The researchers and engineers working on the project come from the American Museum of Natural History in New York, and the California Institute of Technology and NASA's Jet Propulsion Laboratory, both in Pasadena, California.

Project 1640 is based on four major instruments that image infrared light generated by stars and the warm, young planets orbiting them. The instruments are now in operation and producing some of the highest-contrast images ever made, revealing celestial objects 1 million to 10 million times fainter than the star at the center of the image.

At the heart of Project 1640 is the most advanced adaptive optics system ever built. This processes the incoming light from the star in a variety of ways: (1) The computer-controlled adaptive optics apply more than 7 million mirror deformations per second with a precision level better than 1 nanometer. (2) A coronagraph optically dims the star but not other celestial objects (such as orbiting planets) in the field of view. (3) A spectrograph records the images of other any planet(s) present in the form of spectrum of light. (4) A special wavefront sensor, embedded in the coronagraph, senses imperfections in the light path at a precision of a nanometer.

Although the coronagraph effectively creates an artificial eclipse, blocking the dazzling light from the star, about half of a percent of the star's light still gets through in the form of a bright speckled background superimposed on the surrounding planetary system. Each of these speckles can be hundreds of times brighter than any planets present and must be controlled with extraordinary precision – a precision beyond the capability of any previous system.

Project 1640, however, has now demonstrated a technique that can darken the speckles, in effect carving a dark square in the speckle background centered on the star. The dark region is created by measuring and controlling distortions in the distant star's light, caused by traveling through Earth's atmosphere and the instrument's optics at a small fraction of the wavelength of light.