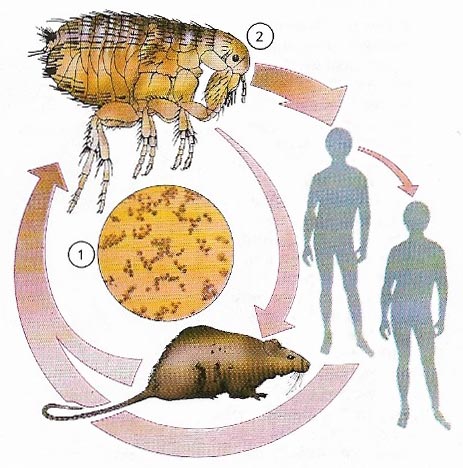 Bubonic plague may still occur, especially in the Indian subcontinent. It is caused by the germ Pasteurella pestis (1) which can live in man, in rats, and in rat fleas (2). If a rat has the infection, the fleas that feed on it will ingest the germ. A person bitten by these fleas will probably develop the plague – and may spread the infecting organism to other humans via their breath.

The plague is a highly infectious disease due to a bacterium carried by rodent fleas. It causes greatly enlarged lymph nodes (buboes, hence bubonic plague), sepsis with fever, prostration, and coma; plague pneumonia is particularly severe. If untreated, death is common and epidemics occur in areas of overcrowding and poverty. It still occurs on a small rural scale in the Far East; massive epidemics such as the Black Death, which perhaps halved the population of Europe in the mid-fourteenth century, are rare. Rat and flea control, disinfection and antibiotics are the mainstay of current prevention and treatment.