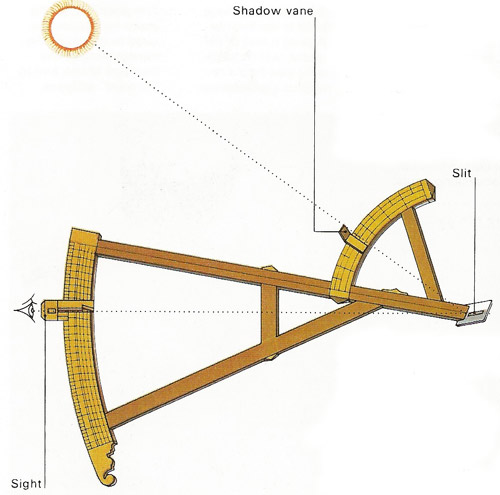 The English quadrant, devised by the explorer John Davis (c. 1550-1605) in about 1595 allowed measurements without direct sighting of the sun. On the upper of two calibrated arcs a vane was adjusted so that the shadow of the sun fell on a sighting slit and the observer could view the horizon simultaneously. The sum of the two readings gave the zenith distance, from which the latitude was deduced.

In astronomy, a quadrant is an old instrument, based on a quarter of a circle and designed to measure the altitude above the horizon of astronomical bodies. As it was originally used, the plane of the quadrant was adjusted to lie in the plane of the meridian. Vertical alignment was indicated by a plumb-bob suspended from the quadrant's center. Pivoted from this center was one end of a movable rod approximately equal in length to the radius of the quadrant. Sights mounted on the rod enabled observations to be made of stars and planets as they crossed the observer's meridian, and an angular scale inscribed on the periphery of the quadrant gave their meridian altitudes.

It isn't certain whether Ptolemy actually constructed such an instrument or not. The Arabians, however, subsequently adopted the idea of the quadrant and greatly improved upon its design: in particular, quadrants were developed that could rotate about a vertical axis. They culminated in an enormous masonry device, 55 meters high, erected in the fifteenth century by Ulugh Beg at Samarkand. See also Tycho Brahe. The quadrant was superceded by the sextant.