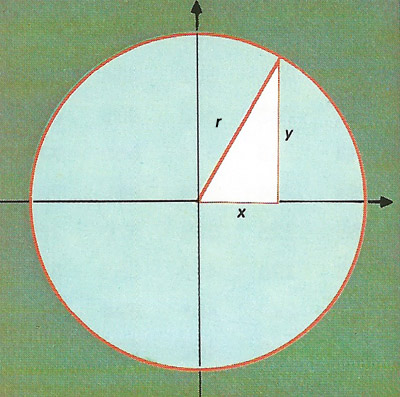 Fig 1. To find the equation of a circle, observe that each point on it forms a right-angled triangle whose sides are the x distance and y distance and whose hypotenuse is r. Pythagoras's theorem tells us that x 2 + y 2 = r 2. For points outside the circle x 2 + y 2 exceeds r 2; inside it x 2 + y 2 is less than r 2. Along the intersection of these two regions the equation balances. All mathematical curves divide space in this way. 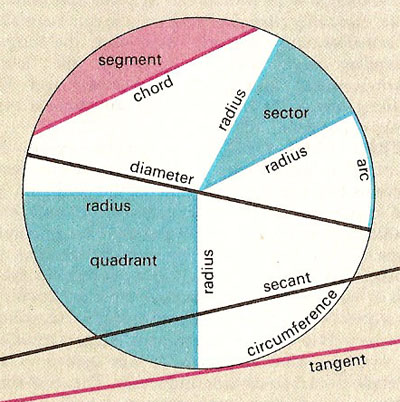 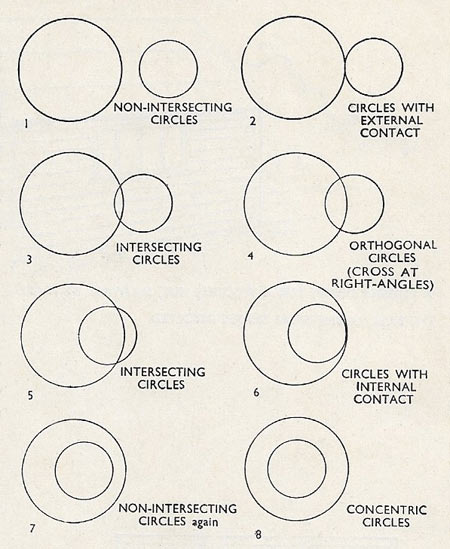 Fig 3. Different positions of two circles. The figures show various stages of one circle moving towards another, with the names describing the relation between the circles. 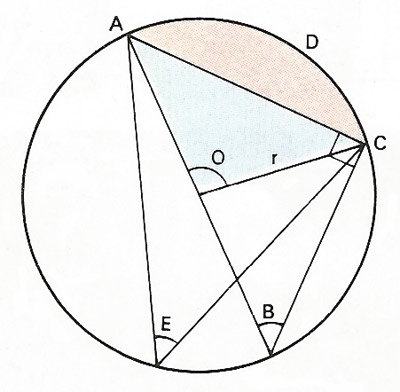 Fig 4. Inscribed angles of a circle.

A circle is the set of all points in a plane at a given distance r, called the radius, from a fixed point, called the center. A circle is a simple closed curve that divides the plane into an interior and exterior. It has a perimeter, called a circumference, of length 2πr, and encloses an area of πr 2.

In coordinate geometry a circle with center (x0, y0) and radius r is the set of all points (x, y) such that:

'Circle' comes from the Latin circus, which refers to a large round or rounded oblong enclosure in which the famous Roman chariot races were held.

A segment is part of a circle bounded by a chord and the arc subtending the chord. A line touching a circle in one place is called a tangent. Tangent lines are perpendicular to radii. Fig 2 illustrates the different parts of a circle. Fig 3 shows what circles are called in different relationships to each other.

In affine geometry all circles and ellipses become congruent, and in projective geometry the other conic sections join them. A circle is a conic section with eccentricity zero. In topology all simple closed curves are homeomorphic to circles, and the word circle is often applied to them as a result. The three-dimensional analog of the circle is the sphere, and the four-dimensional analog is the hypersphere.

The perpendicular onto a chord from the center of the circle bisects the chord.<

Angles in the same segment are equal.

The opposite angles of a cyclic quadrilateral add up to 180 degrees.

The angle in a semicircle is a right angle.

This theorem deals with the "angle in the alternate segment" (see diagram).

Referring to Fig 3, angle O = 2B = 2E. The general theorem that follows from this is that an inscribed is half the central angle. Also, B = E. In general, angles subtended by the same arc are equal.

Note, by the way, that the circumference of the arc ADC is πrO/180.

If three congruent circles all intersect in a single point, then the other three points of intersection will lie on another circle of the same radius. This simple little theorem was discovered by Roger Johnson in 1916.

Draw a triangle, any triangle (although it may be best to start with an acute triangle). Mark the midpoints of each side. Drop an altitude from each vertex to the opposite side, and mark the points where the altitudes intersect the opposite side. (If the triangle is obtuse, an altitude will be outside the triangle, so extend the opposite side until it intersects.) Notice that the altitudes intersect at a common point. Mark the midpoint between each vertex and this common point. No matter what triangle you start with, these nine points all lie on a perfect circle! This result was known to Leonhard Euler in 1765, but was rediscovered by the German mathematician Karl Feuerbach (1800–1834) in 1822.

A circle involute (Fig 5) is the simplest kind of spiral to draw and understand. It is, for example, the path that a goat, tethered to a post, would follow if it walked around and around in the same direction, keeping its tether taut until it wound its way to the center.

The radial distance between adjacent loops of the spiral is equal to the circumference of the central circle. Except for the innermost loop, the circle involute is hard to distinguish from the Archimedean spiral, though the two curves are never identical.