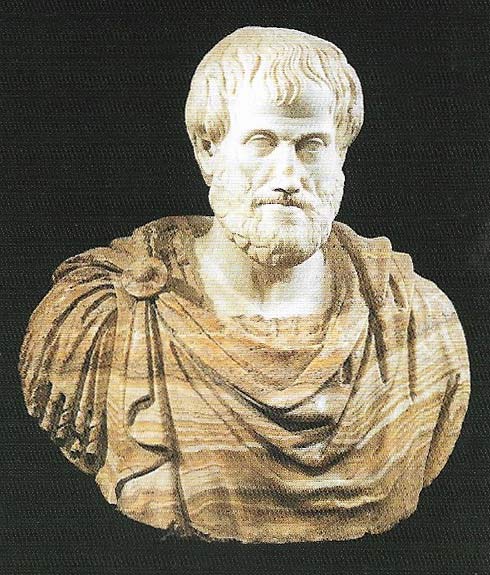 First-century marble bust of Aristotle. It is a copy of a Greek bronze sculpted by Lyssipus in the 4th century BC.

Quintessence is the Latinate name, used by medieval alchemists and scholars, for the fifth element, also known in classical times as the aether. It was one of the five basic elements of nature in the ancient Greek world. The fundamental elements of fire, water, earth, air, and the aether were considered to be the foundation of the universe.

To the ancient Greeks, the universe existed as a system of celestial spheres in which Earth was stationary, located in the center, with all the planet, stars, and other celestial bodies surrounding it in spheres that governed their movements. In his dialogue Timaeus (360 BC), Plato wrote about the elements and their different types, identifying aether as being the brightest part of the air. Aristotle, in his work On the Heavens (c. 350 BC), later hypothesized that the aether was a fifth element in the spaces between celestial spheres.

After Aristotle, the classical explanation of the five elements as the fundamental particles of nature dominated Western scientific thought until the Renaissance. Yet ether, the fifth element, was different. Scientists could directly observe each of the other four elements in nature, while ether remained hidden. Aristotle had to make observations about the world and then hypothesise an element that had yet to be observed. Modern science has long dispelled the idea of the elements, but that the aether did not exist, and was never observed, did not diminish the importance of the concept. Aristotle's postulation that an as-of-yet unobserved particle explained other observed phenomena anticipated the scientific notion that a hypothesis should be able to predict behavior or observation, a concept central to modern science.

Classically, quintessence was the ephemeral substance that prevented the planets from falling to the center of the celestial sphere. Recently, the term has been used to refer to scalar field models for dark energy. These models may be distinguishable from the cosmological constant as dark energy by future experiments which will probe the effective equation of state (ratio of pressure to energy density) of the dark energy. Unlike the cosmological constant, the energy density in scalar field dark energy models is, in general, time-dependent.