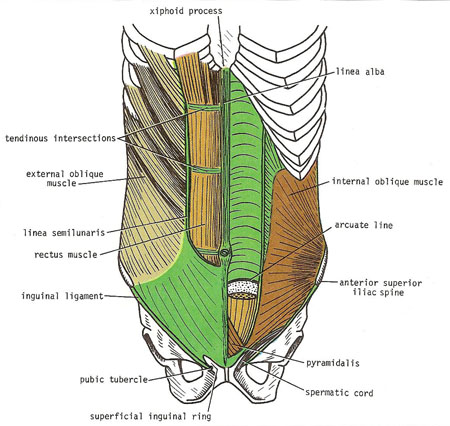 The rectus abdominis is a long strap muscle that extends along the whole length of the anterior abdominal wall. It is broader above and lies close to the midline, being separated from its fellow by the linea alba.

The rectus abdominis muscle arises by two heads, from the front of the symphysis pubis and from the pubic crest. It is inserted into the fifth, sixth, and seventh costal cartilages and the xiphoid process. When it contracts, its lateral margin forms a curved ridge that can be palpated and often seen and is termed the linea semilunaris. This extends from the tip of the ninth costal cartilage to the pubic tubercle.

The anterior surface of the muscle is crossed by three tendinous intersections: at the tip of the xiphoid, at the umbilicus, and halfway between the two. These intersections are strongly attached to the anterior wall of the rectus sheath.