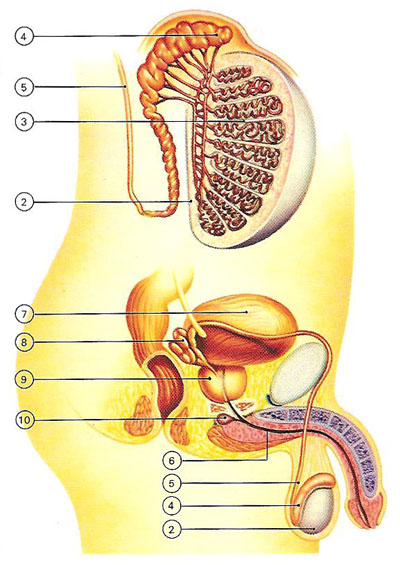 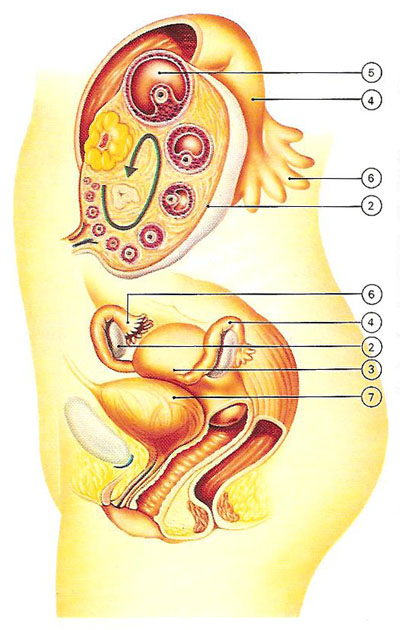 Other systems in the body, such as the endocrine and urinary systems, work continuously to maintain homeostasis for survival of the individual. An individual may live a long, healthy, and happy life without producing offspring, but if the species is to continue, at least some individuals must produce offspring.

Within the context of producing offspring, the reproductive system has four functions:

The male reproductive system is situated both inside and outside the pelvic region.

Referring to Fig 1, outside the body are the testes (2), which every day produce millions of sperm in the convoluted seminiferous tubules (3). The sperm are formed from the cells lining the outer wall. They mature gradually and are pushed toward the center by newly formed cells. Once ready they are stored in the adjoining epididymis (4). During coitus, these pass along the vas deferens (5) to the urethra (6), which also carries urine from the bladder (7). The seminal vesicles (8), prostate (9), and Cowper's glands (10) all secrete fluids into the urethra, helping to make semen.

Most of the male reproductive system lies outside the body. The visible parts are the penis and the testes, which are suspended in the bag-like scrotum. Normally, the penis is limp and flaccid but it becomes erect when the male is sexually excited. Erection is brought about inside the penis by spongy tissue, called corpora cavernosa, becoming engorged with blood.

Just before orgasm, the penis, which is at its maximum length, exudes drops of semen (seminal fluid). These may contain viable sperm which is why withdrawal is ineffective as a contraceptive method. On orgasm, muscular contractions occur at the base of the penis and bring about ejaculation.

For more details, see the separate entry on the male reproductive system.

The female reproductive organs lie within the pelvic girdle.

Referring to Fig 2, The ovaries (2) usually release just one mature egg each month, which is then transferred to the uterus (3) via one or other of the Fallopian tubes (4). Embedded in the ovaries of the newly born female are several hundred thousand of the follicles that can potentially develop into eggs (5). Only a few hundred of them will do so, becoming the mature eggs which, when they are ripe, are caught by the fimbria (6) at the end of the tubes, near the site where fertilization occurs. The woman's urinary system (7), unlike the man's, is separate from the genitals.

The female genitalia, including the labia, clitoris, and vaginal opening, change greatly during arousal and intercourse. Orgasm may cause vaginal spasm and contractions of the womb.