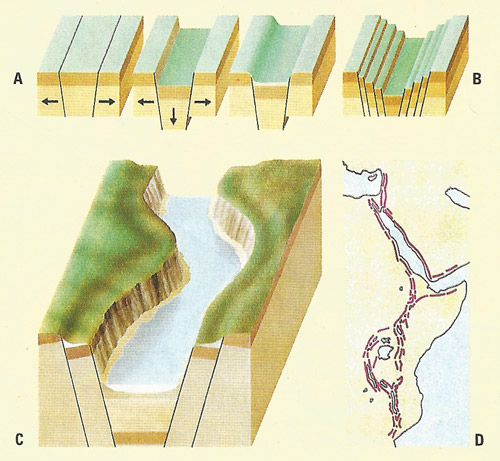 A rift valley is an elongated valley formed by the depression of a block of a planet's crust between two faults or groups of approximately parallel faults (see also graben). As the faults move apart, the central area between them slips down. The friction produced by this slippage can cause earthquakes and also melt rock which is then released on the surface from volcanoes. Large and well-known rift valleys include the Great Rift Valley in East Africa, the Rheingraben, and Valles Marineris on Mars. Rift valleys are also characteristic of mid-ocean ridges.

Referring to the diagrams to the right, rift valleys are formed by tension between two roughly parallel faults (A), causing downward earth movement resulting in the formation of a graben (trough of land between two faults). Sometimes a number of parallel faults results in land sinking in steps (B). A typical example of a step-faulted rift valley is shown (C). A series of block faults can occur on either side of a graben, sometimes tilting in the process of creating the block-faulted rift valley.

The Great Rift Valley is the largest rift valley on Earth: a long depression in Southwest Asia and East Africa caused by the movement of tectonic plates, largely beginning during the Oligocene epoch. In Africa, it extends from Ethiopia southwest 1,200 miles through the lake regions. Many of the early hominid sites are in this valley system.