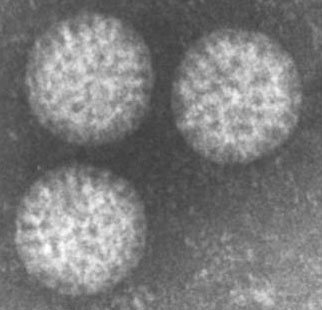 Electron micrograph of a group of rotavirus virions.

Rotavirus is the most common cause of severe diarrhea among children, resulting in the hospitalization of approximately 55,000 children each year in the United States and the death of over 600,000 children annually worldwide. The incubation period for rotavirus disease is approximately 2 days. The disease is characterized by vomiting and watery diarrhea for 3–8 days, and fever and abdominal pain occur frequently. Immunity after infection is incomplete, but repeat infections tend to be less severe than the original infection.

A rotavirus has a characteristic wheel-like appearance when viewed by electron microscopy (the name rotavirus is derived from the Latin rota, meaning "wheel"). Rotaviruses are nonenveloped, double-shelled viruses. The genome is composed of 11 segments of double-stranded RNA, which code for six structural and five nonstructural proteins. The virus is stable in the environment.

The primary mode of transmission is fecal-oral, although some have reported low titers of virus in respiratory tract secretions and other body fluids. Because the virus is stable in the environment, transmission can occur through ingestion of contaminated water or food and contact with contaminated surfaces. In the United States and other countries with a temperate climate, the disease has a winter seasonal pattern, with annual epidemics occurring from November to April. The highest rates of illness occur among infants and young children, and most children in the United States are infected by 2 years of age. Adults can also be infected, though disease tends to be mild.

Diagnosis may be made by rapid antigen detection of rotavirus in stool specimens. Strains may be further characterized by enzyme immunoassay or reverse transcriptase polymerase chain reaction, but such testing is not commonly done.