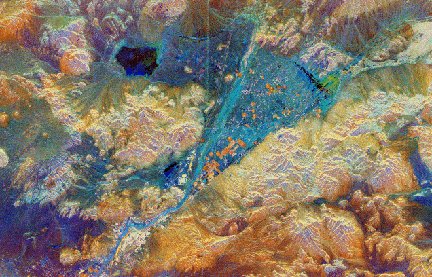 Synthetic aperture radar (SAR) is a high-resolution radar instrument capable of imaging surfaces covered by clouds and haze and used for ground-mapping. SAR images consist of a matrix in which lines of constant distance or range intersect with lines of constant Doppler shift.

SAR is basically a method of ground mapping that uses computer processing to make radar work better. It first appeared in the early 1950s but didn't reach a high state of development for almost 30 more years with the introduction of digital processing and other advances.

SAR yields high-resolution, photograph-quality images because it combines radar images made many miles apart. SAR uses antennas positioned on moving bodies, such as satellites, and then mathematically combines the separate signals transmitted as the antenna moves, simulating or mimicking the transmission of radar from a source with a larger "aperture," or a larger opening. For instance, a European Space Agency satellite with a 10-m SAR antenna mimics the performance of a 4-km-long stationary antenna. The motion of the satellite, combined with the wide beam of the radar, covers a swath along the ground, allowing a large area to be searched quickly – typically 256 sq km. If a few dozen of these swaths are collected, an area of several thousand square kilometers will be covered.

One use for SAR is in searches associated with satellite-based search and rescue systems.