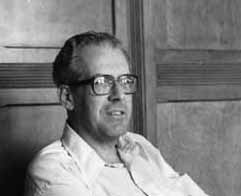 Maarten Schmidt was a Dutch-American astronomer who, in 1963, identified the first quasar, showing that these starlike objects exhibit ordinary hydrogen lines, but with extreme cosmological redshifts that place them at distances of billions of light-years.

A native of Gröningen, Schmidt earned his PhD under Jan Oort at the University of Leiden in 1956. Three years later he went to the California Institute of Technology, where at first he continued working on the mass distribution and dynamics of the Galaxy. When Rudolph Minkowski retired, Schmidt took over his project of taking spectra of objects that had been found to be radio emitters. Thus he came to examine the puzzling spectral lines of 3C273 and to realize that they were none other than the familiar pattern of hydrogen lines but vastly redshifted. Returning home that night, he commented to his wife, "Something really incredible happened to me today." He went on to investigate the evolution and distribution of quasars, discovering that they were more abundant when the universe was younger. He sought to find the redshift above which there are no quasars, and in later years he joined teams studying X-ray and gamma ray sources.