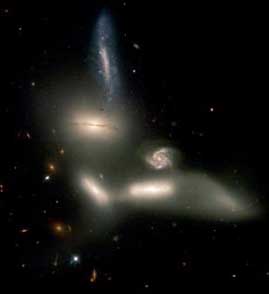 Seyfert's Sextet (Hickson 79) is a compact group of six galaxies on the border of the constellations Hercules and Serpens, discovered by Carl Seyfert in 1951, which provides an interesting example of discordant redshifts. Five of the galaxies have similar redshifts, indicating velocities of recession ranging from 4,017 to 4,482 km/s. However, the sixth, a spiral, is receding from us very much faster – at 19,813 km/s. If, as is generally accepted, all of these redshifts are due to the general expansion of the Universe, then Seyfert's Sextet is really a quintet of interacting galaxies that just happens to lie along the same line of sight as a much more remote galaxy. The dissenting view is that sixth galaxy is physically related to the other five and that the redshift discrepancy is non-cosmological.