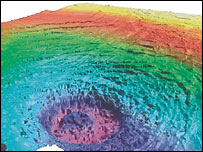 Seismic map of the Silverpit crater.

Silverpit crater is the first impact structure to be found in Britain. Oil geologists stumbled across the ancient crater under the North Sea, 130 km east of England's Yorkshire coast. The 3-km-wide chasm, with a central peaked cone, was punched into the crust 60 to 65 million years ago, and seems very well preserved 1,000 m beneath the seabed. It was probably made by an asteroid or comet weighing around 2 million tons and measuring 120 m across that crashed through the shallow sea that covered Britain back then and would have sent disastrous tsunami tidal waves surging across the nearby Cretaceous land masses.

The crater has been uniquely preserved by sediments settling into the depression, and is unlike any other impact crater so far found on Earth. Other craters we know about were created in hard rocks, whereas Silverpit would have been formed in soft underwater sediments – creating a very different shape of crater. A tall conical central peak is buried inside the crater that is itself surrounded by a series of concentric rings which extend out a further 8 km in each direction. Unparalleled three-dimensional mapping of these concentric features down to a resolution of tens of meters shows that the outer ripples are caused by concentric faults in chalk on the sea floor around the central crater that were probably triggered by the impact. Its shape and size stand Silverpit apart from other craters in the inner Solar System and its closest relative appears to be the crater Valhalla on Jupiter's moon Callisto.